This product is available in: CA, IL, MN, NH, ND Unfortunately, we can't ship to PO Boxes and APO addresses.

This product is available in: CA, IL, MN, NH, ND Unfortunately, we can't ship to PO Boxes and APO addresses. 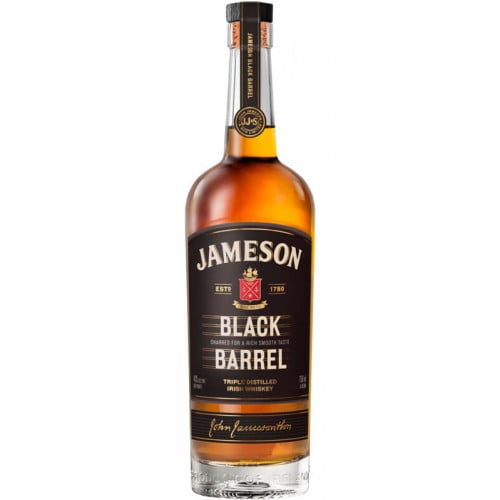 Jameson Black Barrel Irish Whiskey is matured for considerably longer than traditional Jameson Irish Whiskey — twelve years rather than five years — in a combination of ex-bourbon and ex-sherry casks. In addition, an aliquot of grain whiskey that has been matured in deeply charred American oak barrels sourced from Wild Turkey is added. As a result of this unique combination, the whiskey has hints of citrus, oatmeal, sherry and smoke.

You'd be hard-pressed to find a more iconic name in the Irish whiskey world than "Jameson." The Jameson tradition dates all the way back to 1740, when John Jameson was born into a family whose motto, "Sine Metu" ("Without Fear"), was earned through the family's courage in fighting pirates on the high seas during the 1500s.

Jameson Irish Whiskey is crafted from a mash of malted and unmalted barley that is triple-distilled — just as it was by John Jameson himself centuries ago — through three separate copper-pot stills: a wash still, a feint still and finally a spirit still. The mash itself is made using barley, maize and pure Irish water, further adding to the unique character of the whiskey.

Jameson Black Barrel is a blend of pot still and grain whiskey delivering that signature Jameson smoothness. In addition to this pot still and grain whiskey component however, Jameson Black Barrel also contains a small batch of grain whiskey made from a mash of malted and unmalted barley distilled in a column still producing a lighter, sweeter spirit. The blend is matured in a combination of ex-bourbon and ex sherry casks with an aliquot of that spirit matured in American oak barrels which have undergone an additional intense char. This results in a whiskey with even richer flavors of spice, nutty notes and vanilla sweetness, while the sherry casks add sherry fruit flavors. The added time in deeply charred barrels give this whiskey an intensely long finish.

Jameson Black Barrel’s bottle may have changed but the liquid inside has stayed the same, delivering spice, nutty notes, vanilla sweetness and sherry fruit flavors with an intensely bold finish.

This whiskey earned a score of 94 points from the Beverage Testing Institute and Wine Enthusiast.

Aroma is bourbon-like. Hints of toasted oak, caramel, nougat and oatmeal. Notes of citrus, sherry and raisins dominate the palate. Creamy yet smooth body. Whisper of smoke in the finish.