Size750mL Proof83 (41.5% ABV)
Crafted in Washington, D.C.’s first distillery since Prohibition, Green Hat Gin is inspired by the infamous Man in the Green Hat. A true artisanal spirit, it is distilled from 100% highest quality wheat in traditional copper pot stills to which a unique blend of botanicals is suspended during final distillation, resulting in a gentle and refined spirit.
Notify me when this product is back in stock. 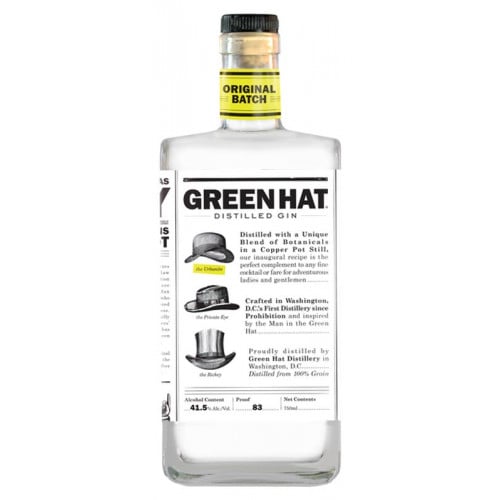 Green Hat Original Batch Gin is the latest addition to the portfolio of award-winning brands at MGP, a world-leading supplier of premium distilled spirits, and their first proprietary gin brand,. A true artisanal spirit, this aromatic gin is distilled from 100% highest quality soft winter wheat in traditional copper pot stills. During final distillation, a carefully selected unique blend of botanicals is suspended in the still, allowing the spirit vapors to extract the exact right flavor and scent notes. Finished with chill filtering, this juniper-forward and balanced blend brings forwards notes of citrus, fennel and celery. Bottled by hand at 83 proof at the distillery, this is an elegant option in a cocktail or over ice with a zest of lemon and lime.

Crafted in Washington, D.C.’s first distillery since Prohibition, Green Hat Gin is inspired by the infamous Man in the Green Hat. Instantly recognizable in his green felt fedora, George Cassiday was a mysterious bootlegger who supplied wet and dry Congressmen, alike, throughout Prohibition. When he was eventually exposed and banned from the House, he continued with his operations in the Senate. Even though he found Senators to be more discreet, when he was caught with 6 bottles of gin in the parking lot, there was no getting out of that and he was arrested. Thanks to his Capitol connections, though, he never spent a night in jail. Cassidy ended up writing a number of frontpage articles, which exposed the hypocrisy of prohibition rules, leading to an eventual Repeal.

Notes of juniper greet you on the nose. Classic aromas of citrus and herbs linger on the palate, leading with tones of lemongrass, celery and fennel. A clean, crisp finish.