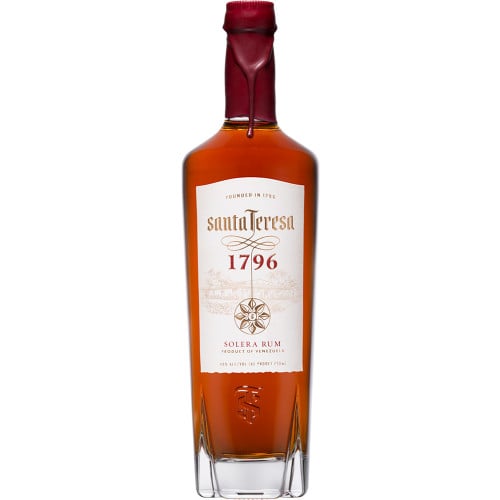 Situated in northern Venezuela, Hacienda Santa Teresa (hacienda is Spanish for plantation) was founded in 1796 by the Count of Trover, and was originally devoted exclusively to the production of sugarcane. At the time, most of the sugarcane consumed in Venezuela was imported from the Dominican Republic, despite the fact that Venezuela's tropical climate and generous rainfall made it ideally suited for the cultivation of fresh, raw cane. Today, over two centuries later, the estate harvests nearly 45,000 tons of sugar cane each year.

Santa Teresa 1796 Rum is made from fresh, ripe sugarcane harvested exclusively from Hacienda Santa Teresa. After the sweetest sugarcane growing on the estate is harvested by hand, it is crushed and the remaining molasses is fermented with a proprietary strain of yeast. Following fermentation, a portion of the wash is distilled through column stills, while the remainder is distilled through pot stills. The wash distilled through the column stills produces a rum that is light in flavor and body, while the copper pot stills produce a rum that is more intense and robust.

Once the rum has been distilled, it is matured through a solera composed of French Limousin oak casks. Solera aging is a process that has generally been reserved for cognacs, ports and sherries. It involves filling a series of casks at different intervals over a long period of time. As rum from the oldest cask is emptied and bottled, the cask is re-filled with an equivalent amount of rum from the second-oldest cask in the solera. This cascading effect continues until the youngest cask in the solera is filled with new rum. As a result, no cask in the solera is ever fully emptied. In addition, as the younger rum cascades through the solera, its average age and complexity gradually increases over time.

Santa Teresa 1796 Solera Rum is made from a blend of rums that have been solera-aged and are up to 35 years old. The rum has an aroma of sweet caramel and creamy vanilla, with touches of toffee, cherries and raisins. The aroma opens up to notes of dried fruits (particularly oranges), molasses and berries on the palate, which fade into hints of toffee, chocolate and cinnamon. The finish, which is long and layered, has notes of dark chocolate and caramel.

The rum earned the Double Gold Medal at the San Francisco World Spirits Competition in 2012, and earned a score of 96-100 points from Wine Enthusiast.

Aroma of sweet caramel and creamy vanilla, with touches of toffee, cherries and raisins. Notes of dried fruits (particularly oranges), molasses and berries on the palate, which fade into hints of toffee, chocolate and cinnamon. The finish, which is long and layered, has notes of dark chocolate and caramel.