Learn more
Size750mL Proof86 (43% ABV) *Please note that the ABV of this bottle may vary
Long known for their vintage statements, the new Soleo Collection is a departure from that tradition. The unrivaled quality and extraordinary character of the distillery remain the same. Bottled at 86 proof, The Glenrothes 18 Year Old has received 98 points, #3 in the "Top 100 Spirits of 2020 & Chairman's Trophy for Best Speyside Single Malt" by the Ultimate Spirits Challenge, 2020. In 2018 F. Paul Pacult called this scotch "The Glenrothes at its majestic peak". 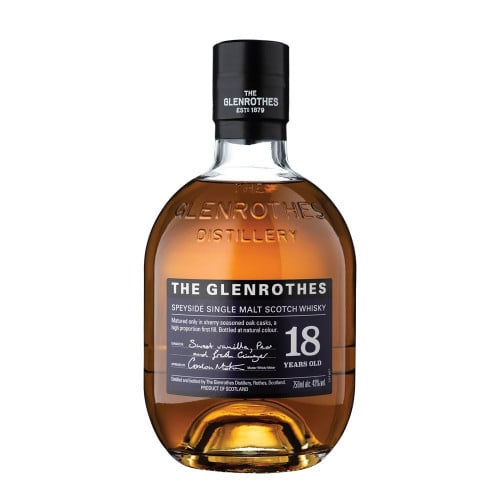 Bottled at 86 proof, The Glenrothes 18 Year Old has received 98 points, #3 in the "Top 100 Spirits of 2020 & Chairman's Trophy for Best Speyside Single Malt" by the Ultimate Spirits Challenge, 2020. In 2018 F. Paul Pacult called this scotch "The Glenrothes at its majestic peak".

The refined character and balance of The Glenrothes 18 Year Old is impressive. It opens the experience with aromas of almonds, pear, vanilla and citrus. It is rich on the palate with a vanilla, rosewater, pear and fresh ginger, leading to an elegant finish with lingering notes. Pour a dram for after dinner or as a compliment to fine chocolate and artisanal cheese. A must try.

Orange oil, vanilla pods, and almonds on the nose. The palate is sweet, with ginger, rose water, pears and vanilla. The finish is sweet, spicy and slightly peppery.