Learn more
Size750mL Proof86 (43% ABV) *Please note that the ABV of this bottle may vary
18 Year Old expression is Highland Park’s most awarded whisky for a reason. Crafted using a primarily first-fill sherry-seasoned European oak casks, this expression is the pinnacle of harmony, complexity and refinement. Winner of the 2018 and 2019 Chairman's Trophy for Best Island Single Malt and named Best Spirit in the World, three times. 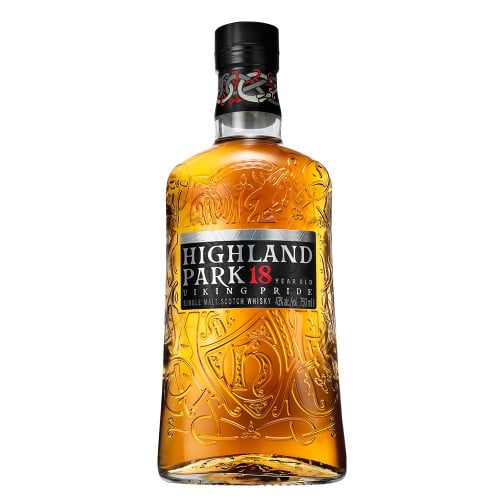 A master class of balance, complexity, and refinement, you don’t have to dig deeply into the Scotch industry to discover this Highland Park 18 Year Old is often considered one of its very finest. It earned the Chairman’s Trophy for Best Island Single Malt Scotch Whisky in 2018 and 2019 before it was retired from competitions, and it was rated the best spirit in the world by F. Paul Pacult (founder of the Spirit Journal), who said "it fits my profile of what makes a perfect whisky, which is to say it's totally in harmony; there are no rough edges and everything is melded together brilliantly." In addition, it has been named ‘The Best Spirit in the World’ three times.

Dark amber color, along with an aroma of ripe cherry, cocoa nibs, and campfire smoke. Aroma gives way to notes of dark chocolate, heather honey, and stone fruit on the palate, which are well-balanced by a subtle, smoky undertone that is accented with a hint of salty tang. Rich, long and luxurious finish with hints of espresso and smoke.