Size750mL Proof80 (40% ABV)
This blended whiskey is crafted with Irish malted barley and Irish wheat. After its initial 4 years of maturation in first-fill bourbon casks, it gets finished for 6 months in stout beer casks that used to hold Black's of Kinsale Stout.
Notify me when this product is back in stock. 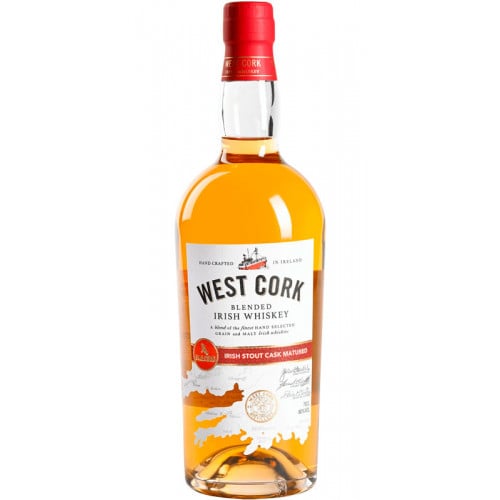 Distilled, matured, and bottled on-site, West Cork offers a diverse lineup of Irish whiskey that is triple-distilled, non-chill filtered, and crafted using local ingredients. West Cork Stout Cask Irish Whiskey is a blend of 75% grain and 25% malt whiskey that is crafted with Irish malted barley and wheat, then aged for 4 years in first-fill bourbon casks. Afterwards, it gets finished in stout beer casks that used to hold Black's of Kinsale Stout, imparting the spirit with chocolate, coffee, and vanilla notes. After spending 6 months in these casks, the whiskey is bottled at 80 proof.

Grab a bottle of this stout cask-finished Irish whiskey today!

The nose has chocolate, raisin, cereal, and cracked nut aromas. On the palate, you'll find rich dark chocolate, coffee, and vanilla notes along with caramel and hints of orange zest.