Size750mL Proof80 (40% ABV)
Triple distilled in small batches from the finest Irish grain and local ingredients, this Irish whiskey is aged in bourbon casks for a smooth drinking experience with a balance of gentle apple, spice, and vanilla notes.
Notify me when this product is back in stock. 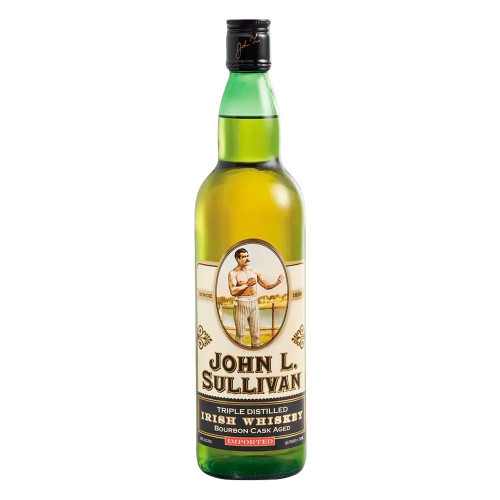 John L. Sullivan is a true sports legend. Nicknamed the "Boston Strong Boy" by the press, the American boxer was born in 1858 and went on to become the last bare-knuckle boxing heavyweight champion as well as the first gloved boxing champion in the world. He was more than that, being one of the world's highest-paid athletes of his time with a massive following that made him a cultural icon. The news coverage of his 10-year reign as champion gave birth to sports journalism in the US as we know it today. He has found plenty of new admirers in recent times, his famous photo finding renewed fame through today's meme culture.

John L., as he was known, liked to escape his handlers to sneak in a drink or two. This small-batch Irish whiskey pays tribute to the man and the legend. It's a blended Irish whiskey that is triple distilled in copper-pot stills using the finest Irish grain and local ingredients. It is then patiently aged in bourbon casks before being bottled at 80 proof. The whiskey has a pleasant balance of apple, spice, and vanilla notes, along with an easy-drinking smoothness

The nose opens with freshly sliced apple, caramel, and hints of spice & oak. On the palate, you'll find caramel, spice, vanilla, and apple. The finish is smooth with lingering notes.