Size750mL Proof90 (45% ABV)
Pegged “the brandy for bourbon lovers” this unique brandy is matured using a variation of the solera method, delivering a cascade of aged brandy ambrosia.
Notify me when this product is back in stock. 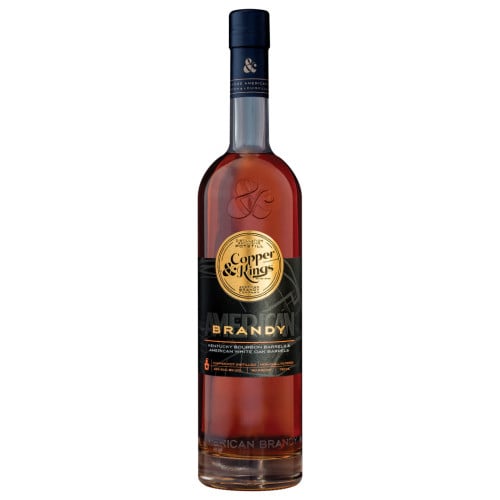 Copper & King American Brandy Company is a spirits producer situated in the northern part of Louisville, KY, adjacent to the Ohio River and a stone's throw away from Indiana, in the picturesque neighborhood of Butchertown. As the name suggests the town used to be home to namely butchers, and brewers, the town is now home to an array of artists, artisans and distillers. They produce a variety of American Brandy, Absinthe and Gin.

The label has pioneered the American brandy movement, a spirit largely associated with European markets. Their aged grape brandy is matured in a combination of 90% Kentucky bourbon whiskey barrels, and 10% medium-char new American white oak barrels, delivering a paradigm-shifting new world of brandy that is distinctively American.

The result is a smooth and aromatic spirit with a bold rebellious character. Copper & King’s original “DNA” brandy was first bottled in the mid-2014, comprised of pure copper pot-distilled brandies sourced from several distillers, the DNA of the spirit has evolved over the years as a cascade of aged brandy ambrosia is added to the younger “new make” (a variation of the classic solera system).

Their own stock of spirit distilled in Butchertown will start entering the bottled blends in Spring 2018. Using traditional copper pot-distillation to forge non-traditional craft-distilled, natural, pure pot-still American brandies. Inspired by American whiskey and American music, Copper Kings utilizes a “low & slow” distillation technique, which requires a relatively low distillation temperature, allowing for a longer, slower distillation and maximum copper contact, to impart a fruit intensity and concentration of flavors and aromas onto the spirit.

The brandy must be aged for two years in oak or longer. This aging process is delicate and sensitive, without any short-cuts. The delicate nature of the distillate requires meticulous maturation. With its fruit-forward luscious notes and toasted oak undertones this truly is the brandy for bourbon lovers.

Notes of caramel, honey, cherry wood, and honeysuckle aromas on the nose with a subtle hint of melon and floral notes. The palate is luscious and viscous. With layered notes of honey, toasted oak, tobacco, dried fruits, and bold spice mid-palate. The finish is lingering and smooth.