Size750mL Proof80 (40% ABV)
Aged for up to fourteen years, this rum earned a score of 93 points at the Ultimate Spirits Competition and won a Gold medal at the Global Rum Masters in 2017 in the Gold Rum Ultra Premium category. 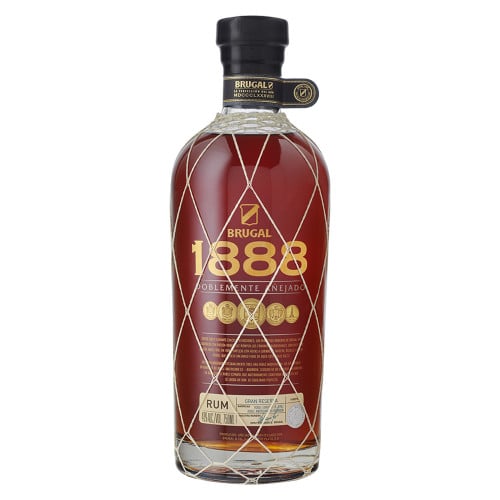 Today, the fourth and fifth generations of Brugal's direct descendants continue to honor the memory of their ancestors by acting as personal guardians of the entire rum-making process at Brugal & Co. Brugal 1888 Rum pays homage to the year that Andrés Brugal moved to the Dominican Republic and brought the craft of making exquisite rum to the country.

Brugal 1888 Rum is made from fresh, raw sugar cane, which is hand-cut from plantations across the Dominican Republic's countryside. Once the cane has been harvested, it is pressed and the remaining juice is turned into molasses. The molasses is then fermented for approximately 48 hours before it is twice distilled through Brugals' copper stills.

Following distillation, the rum is first matured in American oak casks before being double-barreled, or finished, in Spanish oak casks (each cask used in the maturation process is hand-selected by George Espie, Edrington's Master of Wood, and is the same type used to mature the world's best single malt Scotch whisky). "The big challenge was using a different kind of wood," said Juan Campos, Brugal's brand ambassador in the United States, when discussing how Brugal is differentiated from other rums. The Spanish oak casks contribute notes of dark cherries, blackberries and dried fruits, and complement the notes of cinnamon, sugar cane and candied oranges inherent in the rum. "We call it the son of the marriage," Campos says of the rum. "It combines the heritage and knowledge of making rum with knowledge of the wood."

Brugal 1888 Rum has a dark, amber hue, along with an aroma of milk chocolate, roasted coffee and dried apricots. The aroma opens up to a full-bodied rum with notes of lush cherries, peach, cinnamon, cocoa, clove, and leads to a toffeed finish. Brugal 1888 earned a score of 93 points from Wine Enthusiast, which said to "enjoy the elongated flavors of toffee dusted with Mexican-spiced chocolate while you can."

Brugal 1888 earned a score of 93 points at the Ultimate Spirits Competition, won a Gold medal at the Global Rum Masters in 2017 in the Gold Rum Ultra Premium category, and received 93 Points by the Wine Enthusiast Magazine.

The Brugal family recipe is a closely guarded secret, preserved in the hearts of a privileged few, passed down from generation to generation. After going through the distillation process, Brugal Rums are aged for up to eight years in hand-picked American oak casks.
Explore all Brugal bottles >>