Size750mL Proof70 Proof (35% ABV)
This signature bourbon based liqueur was based on an old recipe for a ceremonial duck hunting drink. For every bottle they sell, a portion of the proceeds goes to the non-profit organization, A Soldier’s Child.
Notify me when this product is back in stock. 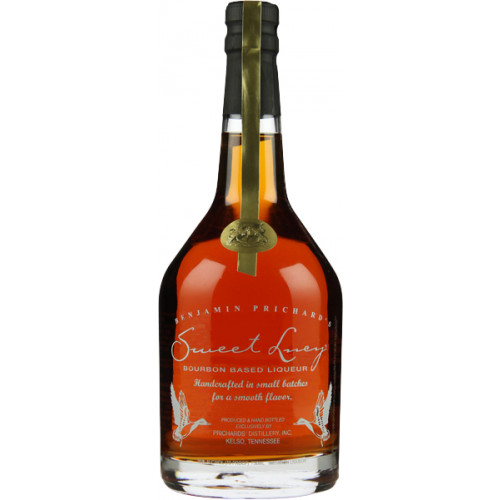 Distilling has been in the Prichard family for 5 generations. In 1822 Benjamin Prichard of Davidson County, Tennessee, passed his “still tubs and utensils thereto” on to his son Enoch. Benjamin’s Tennessee whiskey was a sweeter whiskey, made with a high sugar content white corn, and pure Tennessee spring water. It was distilled using ancient pot still techniques.

They believe in a pure, unadulterated spirit form…from spirit to its bottle, which is has a unique character of authenticity. From its century old inspired handblown bottles. Master distiller Phil Prichard stumbled across such an antique that would become the muse for the signature American Spirit Prichard crooked bottle shape. “Steeped in American history, many of the products we produce harken back to those early days of yesteryear when rum and whiskey were very much a staple of early New England history” Prichard says.

Sweet Lucy is a bourbon based liqueur born of tradition, backed by a great story like most of their products. As a “frequent companion on duck hunts, variations of Sweet Lucy were generally homemade elixirs of peaches, oranges and apricots with lots of sugar and whiskey. Great pride would often be displayed by its maker as the bottle made its rounds for a sip among friends.” Prichard’s Sweet Lucy Liqueur is no different. And as their most popular product, for every bottle they sell, a portion of the proceeds goes to the non-profit organization, A Soldier’s Child. Bottled at 35% ABV.

Pick up a bottle of this signature liqueur today!

Heavy notes of baking spices and orange peel on the nose. The palate is sweet and creamy with notes of vanilla, peaches, oranges, apricots, bourbon and spice.

4.2 out of 5
(3 reviews)
Write a review
Real email address is required to social networks
Sign in
Login with Google
Login with Facebook
Or
We also recommend