Learn more
Size1750mL Proof90 (45% ABV) *Please note that the ABV of this bottle may vary
Aged for a minimum of six years, this whiskey earned a score of 95 points from Wine Enthusiast, which called it a "Best Buy."
Notify me when this product is back in stock. 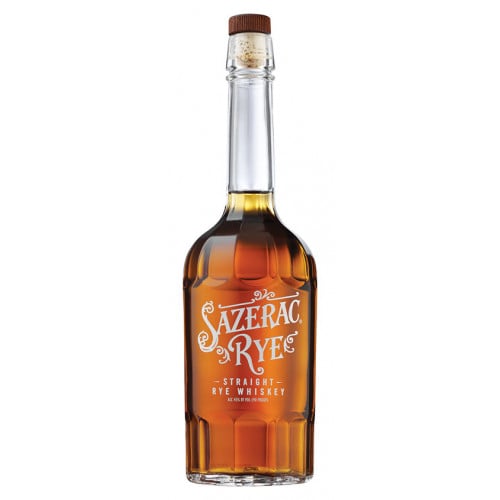 In 1838, a Creole immigrant named Antoine Peychaud opened the doors to a pharmacy on Royal Street in the French Quarter of New Orleans. While Peychaud was an apothecary by trade, he was also a natural mixologist. He would often invite friends over to his pharmacy after it had closed and mix drinks for them, including a drink he crafted from brandy, absinthe and a proprietary blend of bitters.

Peychaud's cocktail became wildly popular throughout New Orleans. In 1850, Sewell Taylor — owner of the Sazerac Coffee House located on Exchange Alley — institutionalized the cocktail by using only Sazerac de Forge et Fils Brandy, a brandy which Taylor imported and sold exclusively. By 1869, Thomas H. Handy had purchased the Sazerac Coffee House from Taylor and by the turn of the century, a phylloxera epidemic forced coffee houses (at the time, the term "coffee house"was used to refer to a cocktail bar) to use rye whiskey rather than brandy in the making of the Sazerac.

Sazerac Straight Rye Whiskey is rumored to be made from a mash of 51% rye, 39% corn and 10% malted barley. Following distillation, the whiskey is aged for a minimum of six years in the Kentucky heat, before a small batch of barrels are married together. The whiskey has a copper-bronze color, along with an aroma of rye, malt, cinnamon, cloves and black pepper. The aroma gives way to notes of chewy caramel, vanilla, spicy rye and candied citrus on the palate, and ends with a touch of dried fruits and rye.

Sazerac Straight Rye Whiskey earned a score of 94.5 points from Jim Murray's Whisky Bible, and a score of 95 points from Wine Enthusiast, which called it a "Best Buy." In addition, it earned the Best American Rye Whiskey Award at the Los Angeles International Wine & Spirits Competition, and the Gold Medal at the San Francisco World Spirits Competition.

Copper-bronze color. Aroma of rye, malt, cinnamon, cloves and black pepper. Notes of chewy caramel, vanilla, spicy rye and candied citrus on the palate. Ends with a touch of dried fruits and rye.