Size750mL Proof80 (40% ABV)
This whiskey is a blend of 75% Irish wheat and 25% Irish barley whiskey. After spending 4 years in first-fill bourbon casks, the malt and grain components are blended and transferred into Blacks of Kinsale IPA beer casks for another 6 months.
Notify me when this product is back in stock. 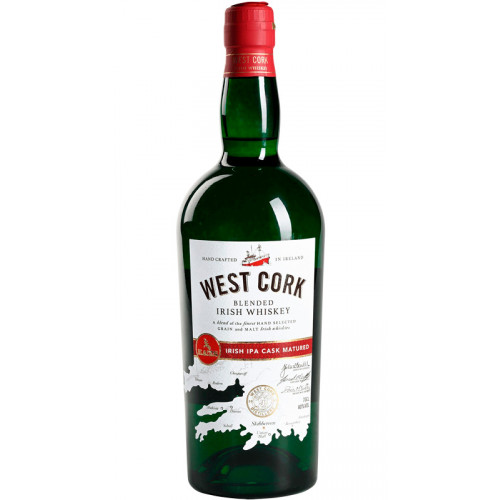 Distilled, matured, and bottled on-site, West Cork offers a diverse lineup of Irish whiskey that is triple-distilled, non-chill filtered, and crafted using local ingredients. West Cork IPA Cask Irish Whiskey is a blend of 75% Irish wheat and 25% Irish barley whiskey. After spending 4 years in first-fill bourbon casks, the malt & grain whiskeys are blended and finished in beer casks for another 6 months. These casks used to hold an IPA beer from the Blacks of Kinsale brewery.

Grab a bottle of this IPA cask-finished Irish whiskey today!

The nose opens with hoppy aromas with citrus, tropical fruit, and a distinct sweetness. On the palate, you'll find caramel, toffee, citrus zest, roasted nuts, malt, and spice, along with some sweetness. The finish has lingering sweet vanilla and malt notes.