Size750mL Proof80 (40% ABV)
Made with 100% blue agaves in Mexico, Jalisco, this tequila is aged for around 18 months in American oak casks with a special toast. As all KAH's expressions, it comes in a unique bottle ― this one paying tribute to Nicaraguan Day of the Dead traditions. 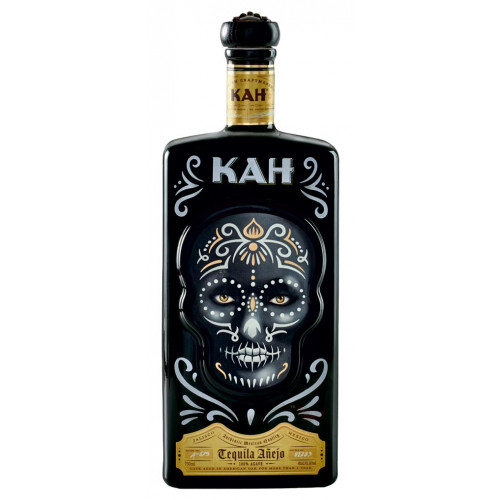 Dia de los Muertos (Day of the Dead) is a Mexican holiday with roots in Mayan and Aztec culture. Instead of mourning and sadness, it celebrates the lives of the departed, seeing death as a natural part of life. KAH Tequila (ancient Mayan for "life") honors Mexico and its people, channeling the spirit of this joyful holiday and its famous imagery. The unique packaging is inspired by calaveras ― traditional colorfully-decorated sugar skulls that symbolize death and rebirth.

Produced at the modern distillery Fabrica de Tequilas Finos, which was established in 2000 in the town of Tequila, Jalisco, it's a proper traditional tequila that comes in the standard 3 formats: Blanco, Reposado, and Añejo. Made with 100% blue agaves from the highlands and lowlands of Jalisco, the agaves are picked at optimal ripeness, having matured for 6 to 7 years. They are then cooked for 9.5 hours, milled, and filtered. After the juice has fermented for 42 hours, it is double-distilled and brought to proof with reverse-osmosis and charcoal-filtered water from a nearby volcano spring.

Aged around 18 months in American oak casks with a special toast, the Añejo expression is the oldest in KAH's lineup of tequila. Its elaborate bottle pays tribute to Nicaraguan Day of the Dead traditions with elaborate shrine-building and gift-giving and spending a night at the graves of the departed. The delicious tequila has won several awards over the years, including a Silver Medal at the "The Tequila & Mezcal Masters".

Full-bodied and viscous, this aged Añejo tequila has agave, chocolate, tobacco, and coffee notes, along with a prominent sweetness.