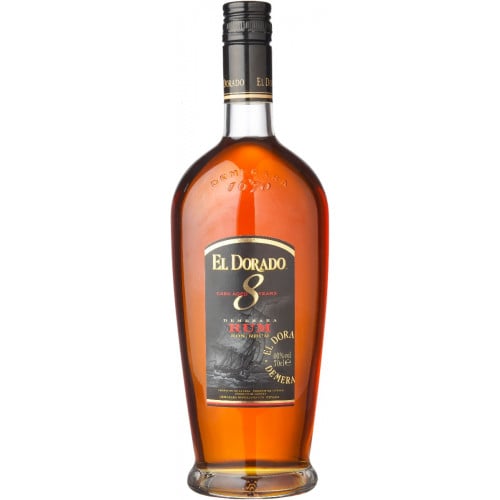 Situated along the northern coast of South America, Guyana was colonized by the Netherlands in the early 17th century. Much like other European countries at the time, the Dutch used their settlement’s tropical climate — Guyana enjoys an average temperature of up to 89.6° F and up to 137.8 inches of rainfall annually — as a source of raw, fresh ingredients that were unable to be harvested on the European continent.

In 1658, Guyana began exporting sugar back to the Netherlands and within a decade, farmer’s along the Demerara River began distilling their excess cane sugar into rum. By the turn of the century, the tiny Caribbean country had over 300 unique distilleries. Today, Demerara Distillers Co. — the last remaining rum distillery in the country — pays homage to Guyana’s rich tradition of distilling fine rum with El Dorado 8 Year Old Rum.

El Dorado Rum is made from fresh, raw sugar cane cultivated in Guyana’s rich, alluvial soil. After the sugar cane has been harvested by hand, it is transported back to Demerara Distillery by barge. There, the molasses is fermented with a proprietary strain of yeast specifically designed to control the brix of the wash (brix is the measure of dissolved solids in a solution). Following fermentation, the rum is distilled through Demerara Distillers antique wooden and copper stills (the stills, which are up two two centuries old, were used when the country was still a settlement).

Following distillation, El Dorado 8 Year Old Rum is matured in bespoke, 45-gallon American oak casks that were previously used to mature whiskey. The hand-coopered barrels are allowed to mature in a custom-built warehouse, where Guyana’s intense heat and tropical climate forces the rum and wood to mingle.

Once the rum has rested for a minimum of eight years, it is brought to proof and bottled by hand. The rum has a dark aroma, with hints of tobacco, caramel and toffee. Notes of stone fruits, banana, creme brulee and papaya dominate the palate, and lead to a soft and slightly sweet finish with traces of oak and butterscotch.

The rum was named the Best Rum of 2014 by F. Paul Pacult’s Spirit Journal, which also named it one of the top ten spirits of the year. In addition, El Dorado 8 Year Old was named the second best rum at the Imbibe Magazine tasting competition in London.

Get your bottle of El Dorado now!

Dark aroma, with hints of tobacco, caramel and toffee. Notes of stone fruits, banana, creme brulee and papaya dominate the palate, and lead to a soft and slightly sweet finish with traces of oak and butterscotch.