Ten To One Dark Rum 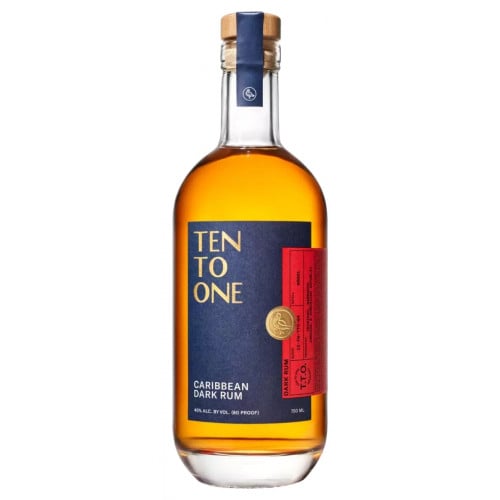 About Ten To One Dark Rum

Ten To One's Dark Rum expression is a masterful blend of 8-year-old Barbados, Dominican, and Trinidadian column still rums that were aged in American oak ex-bourbon casks and then combined with Jamaican pot still rum. This smooth expression is pure rum with no additives, sugar, artificial color, or flavoring, bottled at 80 proof. With a unique flavor profile including notes of baking spice, banana peel, yellow apple, cedar, and leather, it's a complex and flavorful sipper that is plenty versatile, and more than expressive enough to be enjoyed on its own, it makes for a wonderful cocktail base as well. Having garnered critical acclaim, Ten To One Dark Rum was awarded the prestigious Double Gold Medal and 97 Points at the Proof Awards, 2020, as well as the Gold Medal at The Rum Masters, 2021.

Ten To One was founded and launched in 2019 by Caribbean son, Marc Farrell who was born and raised in Trinidad. Named after a phrase by Trinidad and Tobago's first Prime Minister, Ten To One is a brand that is "elevated, but not exclusive." Narrating a contemporary story of authentic Caribbean culture, the brand's goal transcends beyond just simply bringing amazing Caribbean rum to the US and global market, but rather reimagining rum and "broadening and challenging the current perception around rum and the occasions for which it might be considered the spirit of choice for today’s consumer," says Farrell.

The fruity and spicy profile opens with banana, spice, apple, toffee, and nutty notes. There's toffee, nuts, vanilla, cinnamon, tobacco, and leather on the palate along with a pleasant fruity sweetness. Caramel and spice linger through the dry finish.