Size750mL Proof80 (40% ABV)
The House of Angostura is open about the value that they place on nature, and the tropical environment in the Caribbean community in which their award-winning spirits are made. This Angostura 7-year is heavily packed with rich full-bodied flavors like maple, chocolate, honey and toffee.
Notify me when this product is back in stock. 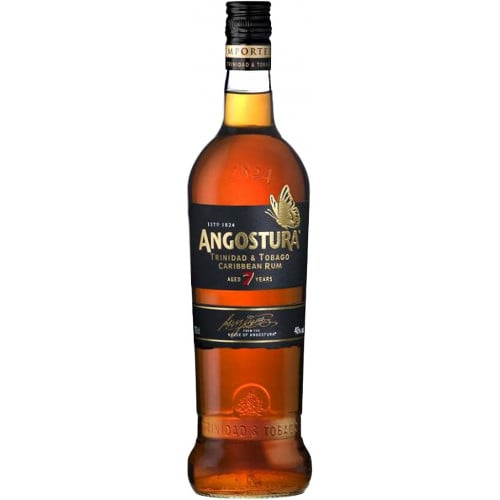 In 1824, Dr. Johann Siegart, a German doctor serving as Surgeon-General of Simon Bolivar's army in Venezuela, was working to find a medicine that would enhance the appetite and digestive well-being of his soldiers. Dr. Siegart eventually settled upon a mix of herbs and spices that he called “Amargo Aromatico” — today, this world-famous concoction is known simply as Angostura Bitters.

Building on his early success, Dr. Siegart established the House of Angostura in the eponymous Venezuelan city, where he began to manufacture his bitters on a grander scale (the business would later become the sole purveyor of bitters to the King of Prussia, Spain, and King George V). As he continued to expand, Dr. Siegart, along with his younger brother and his son, moved the House of Angostura to Port of Spain, Trinidad in 1876 and began producing rum.

Angostura’s 7-year-old rum is produced from molasses using a five column still. This richly flavored Caribbean elixir is aged and then mixed with an even more purified spirit. This blending process yields a more refined character. After the portions of the blend are aged for at least 7 years in charred American oak bourbon barrels. They are hand drawn from the barrel, mixed, filtered, and bottled at 40% ABV in a sophisticated bottle adorned with a small butterfly.

Butterflies have long been associated with Angostura’s rums. The House of Angostura is actually home to the Barcant Collection of more than 5,000 butterflies. Their butterfly logo is also said to represent the phenomenon when swarms of butterflies gather around ripened sugar cane plants when the cane is ready to be harvested.

The House of Angostura is open about the value that they place on nature, and the tropical environment in the Caribbean community in which their award-winning spirits are made.

Their Angostura 7-year is heavily packed with flavors like "maple, chocolate, honey and toffee that presents a rich full-bodied taste that tapers off into the classic rum finish. It can be enjoyed neat as a sipping rum, or over ice, equally, it can mix a stunning contemporary take on a Manhattan or an Old Fashioned." - Angostura

Pick up a bottle of this fantastic rum today!

Butterscotch, wood spice, toffee, light tobacco, orange peel marmalade, and hints of chocolate and coffee on the nose. Oak spice, zesty orange and banana peel, and subtle sweet butterscotch on the palate, with sweet butterscotch, spice, and flavors of vanilla, honey, a hint of tobacco, and cocoa. Dry and spicy on the finish.