Size750mL Proof80 (40% ABV)
Wild Tiger Special Reserve Rum is an exotic and aromatic blend of column distilled rums made from molasses and aged in ex-Bourbon oak casks, and double pot distilled spirit produced from pure cane juice. Part of the profits from this Indian rum go towards the conservation of Bengal tigers.
Notify me when this product is back in stock. 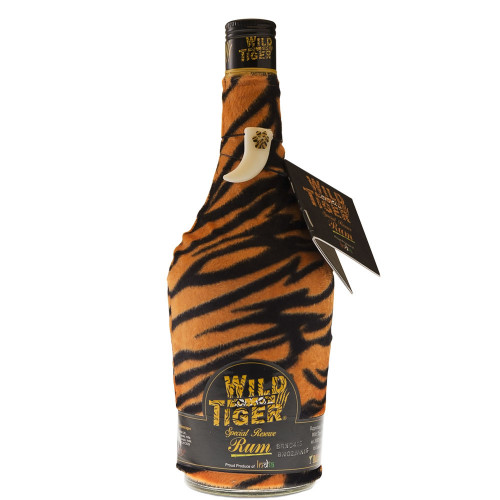 Wild Tiger Special Reserve Rum is aged, blended and bottled by SDF Distilleries on the banks of the Bharathappuzha River in the Indian state of Kerala. The brand, independently owned by Wild Tiger Beverages, is the brainchild of entrepreneur and rum aficionado Gautom Menon. Driven by the fact that India as one of the largest producers and consumers of rum did not have a single premium rum reflecting that globally, Gautom decided to create a rum that would embody the vibrant spirit of India, and which could be poured with pride. The brand name was registered in 2006, and it took almost a decade before the rum launched in London in October 2015. The blend was created by one of Asia's finest master blenders – NJ Menon, who has over four decades of experience in making award winning and bestselling whiskies and rums.

Gautom is also a tiger enthusiast, and the brand pledged to contribute part of its profit to the conservation of this majestic species and its habitat. The number of Bengal tiger roaming the Indian forests dropped from 40,000 in mid-20th century to less than 2000 today. Determined to leave the world in a better state for future generations, Gautom set up WTF – Wild Tiger Foundation, which works closely with leading tiger conservationists, local authorities and NGOs. The brand is also committed to empowering women and creating equal opportunities, and over 80% of its production force on the bottling line are women.

Wild Tiger Special Reserve Rum is an exotic and aromatic blend produced in India. It is a blend of column distilled rums made from molasses and aged in American oak casks previously used to mature bourbon whiskey, married with double pot distilled spirit produced from pure cane juice. The rum comes in a recycled glass bottle with a velvet tiger print sleeve, which is also made using recycled materials. And just like stripe patterns are unique to every tiger, the sleeve has been designed to ensure that no two bottle designs are alike.

The nose is intense, with hints of vanilla, toasted wood, cocoa and butterscotch. The palate is medium-bodied and complex, with notes of molasses, toffee, vanilla, almond and honey. The well balanced finish with rich mouthfeel leaves a lingering aftertaste.