Size750mL Proof86 (43% ABV)
A blend of over twenty rums from five different islands, this rum won the Best New Product award at the 2011 Tales of the Cocktail Competition. 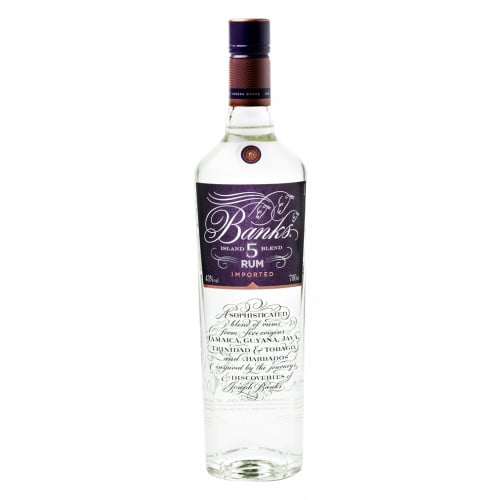 Rums wear their country of origin like badges of honor. A Jamaican rum-maker would bristile if his rum were mistaken for a Barbados rum, and a distiller from Trinidad would raise a cri de coeur if his rum were lumped together with the rest of his Caribbean brethren.

Banks 5 Island Rum is an incredible blend of over twenty rums — each aged between three and twelve years — sourced from five different islands. Using an aged Trinidadian rum as a backbone, Arnaud de Trabuc, master blender at Banks Distillery, layered Banks 5 Island Rum with rums from Jamaica, Guyana (not actually an island, but who's counting?), Barbados and Indonesia.

Each island brings a unique characteristic to the blend — the Trinidadian rums adds structure, the Jamaican rums adds complexity, the Guyanese rums adds sweetness and the Barbados rums add spice. The distinct flavor profile though, comes from Arrack, a rare ingredient from the island of Java, Indonesia, which adds a unique, exotic aroma and exceptionally long finish.

A sweet nose, this rum initially has a surprising peppery flavor which is followed by notes of ginger and tropical fruit. A long, great finish.