Be the first to review this product
Two Indies is a fruity and spicy rum crafted by Amrut Distilleries in the Indian city of Bengaluru. A tribute to two rum making cultures, it is made by blending premium Caribbean rum and matured Indian rum made from jaggery, a form of unrefined cane sugar with rich molasses flavor.
$34.99
Add to Wish List

Amrut Distilleries is best known for its award-wining Indian single malt whiskies, crafted in the city of Bengaluru (also known as Bangalore). The company’s story is almost as old as independent India. It was established as Amrut Laboratories in 1948 by Shri J.N. Radhakrishna or J.N.R, who invested a few lakhs (an Indian unit equal to 100,000) into a new business and opened a small blending and bottling facility. The company quickly established itself as a significant supplier of Indian Made Liquor (IML) to the military, and also grew to be one of the leading suppliers in its home state of Karnataka. In the 1960s, Amrut Distilleries started making rum, and a decade later it added brandy to its portfolio. After the founder’s death in 1976, his son Shri Neelakanta Rao took over as the chairman and managing director. In the 1980s, Amrut ventured into a new territory and started making Indian malt whisky.

With the combination of time-tested traditions introduced by the founder, and his son’s penchant for innovation and technology, Amrut Distilleries has firmly established itself as a national industry pioneer and leader, and developed into a global brand respected for the quality of its products. Amrut Distilleries’ portfolio features nearly two dozen world-class Indian single malts and two rum expressions, and its award-winning spirits are now available across the world markets.

Two Indies Rum is a tribute to farmers of two cultures with a long history of rum production – West Indies (Barbados, Guyana and Jamaica) and the East Indies (India). It is a blend of premium Caribbean rum and matured Indian rum made from jaggery, a form of unrefined cane sugar with rich molasses flavor used in the making of candy and desserts. This fruity and spicy rum, bottled at 42.8% ABV, is a unique marriage of the best of two Indies.

The nose has notes of almond with freshly cut sugarcane, and tropical fruits with a hint of ripened banana. The palate is slightly dry, with sugarcane flavors and a dash of tropical fruits and honey. The finish is sweet and dry. 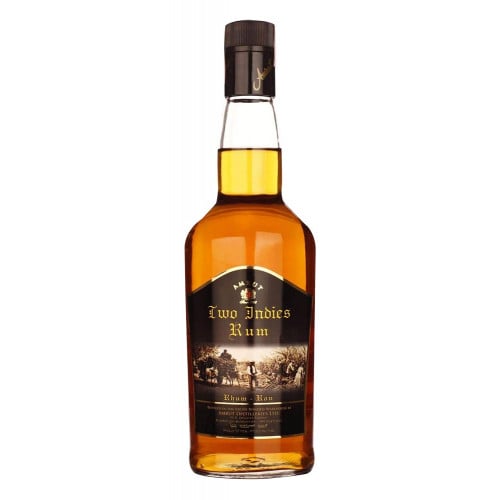