Size750mL Proof100 (50% ABV)
A limited-edition Scotch, this whisky pays homage to the 80th anniversary of Prohibition.
Notify me when this product is back in stock. 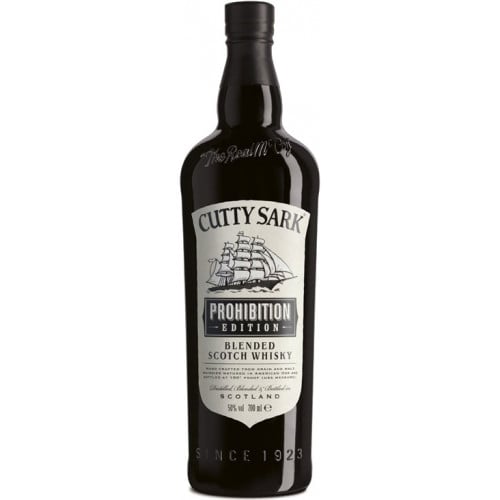 Built in 1869 with an iron frame and a wooden hull, the Cutty Sark is a British clipper ship that was designed to transport tea from from China to London. At the time of its construction, the tea trade was intensely competitive and substantial bonuses were paid to ships that arrived in London with the first tea of the year. As a result, the Cutty Sark was engineered to be one of the fastest ships in the world, logging a maximum speed of 17.5 knots. The ship's name was derived from the nickname of Nannie Dee, a witch in Robert Burns' poem Tam o'Shaner.

Cutty Sark Scotch Whisky is produced by Edrington of Glasgow, whose main offices are fewer than 10 miles away from the birthplace of the clipper. Cutty Sark Prohibition Edition pays homage to Captain William McCoy, who smuggled Cutty Sark whisky into the United States during Prohibition. His reputation for dealing with unadulterated liquor (at the time, many bootleggers mixed their spirits with other liquids in order to increase yield) gave rise to the Cutty Sark being referred to as "The Real McCoy."

Cutty Sark Prohibition Edition Scotch Whisky is crafted from a blend of the finest single malts and top-quality grain whiskies available in Scotland, including whiskies sourced from The Macallan and Highland Park. Once the whiskies were identified, they were married together in hand selected American oak casks and then brought to 100 proof before being bottled.

As a result, the whisky has a golden honey color, along with an aroma of ripe citrus, orange zest and fragrant spices. The aroma gives way to notes of toffee, creamy vanilla, pepper and coffee beans on the palate, and leads to a finish accented by touches of oak spices and sweet fruit.

"This blend is created with exact precision as Captain McCoy himself would approve to celebrate the 80th anniversary of such a significant era," says Kirsteen Campbell, the distillery's Master Blender.