Size750mL Proof80 (40% ABV)
Originally crafted by master tea blenders from Aberdeen in 1879, this whisky has returned to its roots with a new fantastic blend at an unbelievable price.
Notify me when this product is back in stock. 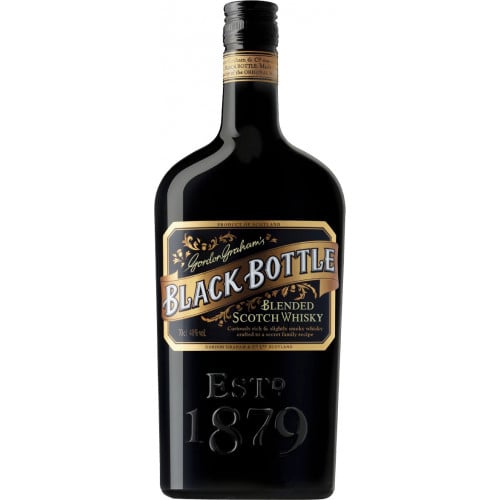 The Grahams from Aberdeen — Charles, David and Gordon — had already established themselves as master tea blenders when, in 1879, they turned their attention toward another drink, this time something quintessentially Scottish in nature: whisky.

Originally crafted from a blend of Scotches produced in the North East of the county, Black Bottle Blended Scotch Whisky came shrouded in the finest black glass from Germany, offering a unique look representative of the Graham Brothers’ industrious and entrepreneurial nature. Hand-wrapped in foil, each bottle contained the following note:

“If on my theme, I rightly think, there are five reasons why I drink. Good wine — a friend — because I’m dry. Or lest I should be by-and-by. Or any other reason why.”

During the start of World War I, the supply of German black glass fell, and the formerly indomitable Grahams were forced to substitute green glass for their revered black glass bottles. Later in the century, the blend was changed to incorporate more Islay flavors, making the whisky smokier and less reminiscent of the Grahams’ original blend.

Recently revitalized by Master Distiller Ian MacMillan, Black Bottle Blended Scotch Whisky has returned to its roots with a new and fantastic blend reminiscent of the Grahams’ original recipe. The blend, which is characteristic of a Speyside whisky, has a beautiful aroma of honeysuckle, oak, chamomile and faint smoke, and leads to a subtle palate filled with dried fruits, sweet oak, vanilla and honey. The finish is filled with nutmeg and pepper, and lingers with just a touch of smoke.

“The challenge was to develop a liquid that was more in line with the original character of Black Bottle while maintaining all of the quality for which the brand is renowned,” says MacMillan.

Now back in its original black glass bottle for the first time in nearly a century, Black Bottle Blended Scotch Whisky is a fantastic, authentic whisky at an unbelievable price. Pick up a bottle today!

Beautiful aroma of honeysuckle, oak, chamomile and faint smoke, and leads to a subtle palate filled with dried fruits, sweet oak, vanilla and honey. The finish is filled with nutmeg and pepper, and lingers with just a touch of smoke.