Size750mL Proof80 (40% ABV)
Ilegal Smooth is the world's first Scotch whisky that has been finished in mezcal casks. It adds another layer to the fantastic 8-year-old blended spirit's profile with additional green pepper and smoky notes for a truly unique drinking experience.
Notify me when this product is back in stock. 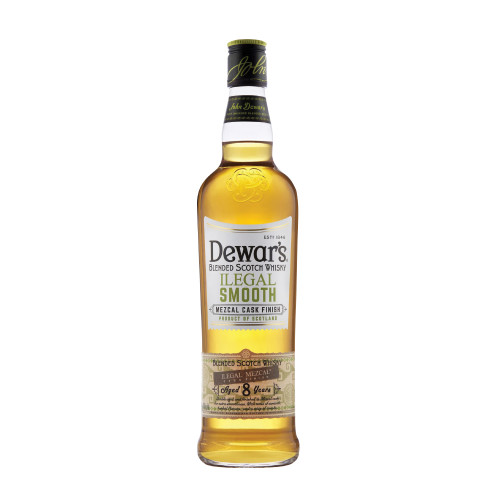 Dewar's Signature Blended Scotch Whisky — the flagship whisky of John Dewar & Sons Co. — is crafted by blending together "the rarest of rare whiskies from across Scotland." The backbone of the whisky is a 27-year-old single malt whisky that is crafted at Aberfeldy Distillery, according to master blender Thomas Aitken. Once the 27-year-old is married together with other whiskies, the resulting blend is allowed to rest again in oak casks. This secondary maturation process "is a marriage made in heaven — ensuring our whiskies are even smoother and creamier," says Aitken.

Created in partnership with Ilegal Mezcal, Dewar's Ilegal Smooth takes an 8-year-old double aged blended Scotch whisky to a round of finishing in barrels that used to hold Mezcal from Oaxaca, Mexico — the first such whisky in the world. Their recipe of up to 40 single malts is upgraded with unique green pepper and subtle smoky notes. "It's a nice shift to have our used Ilegal Mezcal barrels crossing borders to age whisky in Scotland. The finished product is delicious," says Ilegal Mezcal founder John Rexer.

There's caramel on the nose with floral and vegetal green pepper notes, agaves, and a subtle smokiness. The palate has honey, those same vegetal notes, and a peppery spice. Finishes with a pleasant lingering spiciness.