Be the first to review this product
This is the first single malt expression from the Scottish Glenmorangie, made for mixing. Crafted with top bartenders, X by Glenmorangie’s sweeter and richer taste both complements and cuts through all types of mixers, for delicious drinks (but, as you’d expect, is also delicious neat).
$30.99
Add to Wish List

In 1738, a brewery was built upon Morangie Farm in the Highlands region of Scotland. A century later, William Matheson acquired the farm and equipped the Morangie brewery with two stills that he purchased second-hand and renamed the brewery-converted-distillery Glenmorangie.

Glenmorangie whiskies are made using malted barley, which is mashed and fermented with water sourced from the Tarlogie Spring. The water produced from the spring, which spends nearly a century underground being filtered through layers of limestone before it is extracted, is unusually rich in minerals. In the 1980s, when development in the area threatened the spring's water quality, Glenmorangie purchased 600 acres of land around the spring in order to ensure a consistent and everlasting supply.

After the barley has been fermented, the wash is twice distilled through Glenmorangie's copper-pot stills by The Distillers of Tain. Glenmorangie's stills are equipped with relatively small boiler pots, which increases the exposure of the whisky to the copper, resulting in a purer flavor. In addition, the stills are nearly seventeen feet tall — the tallest of any distillery in Scotland — and as a result, produce a lighter, more refined whisky.

In 2021, Glenmorangie released, X by Glenmorangie, their first single malt expression, made for mixing. A sweeter and richer single malt, this dram is intended to be enjoyed in long drinks and cocktails but is delicious neat. Created in cooperation with top bartenders, this expression boasts flavors of vanilla, pear, orange sherbet & chocolate fudge, that goes perfectly with any mixer.

Mix things up with X by Glenmorangie today!

Greeting with a succulent nose with aromas of pear, vanilla and honeysuckle and oranges. The well-balanced and extravagant palate opens up with a plethora of flavors from orange sherbet to bursts of creme brûlée, drizzled with chocolate fudge. The finish is long, wonderfully chewy and sweet. 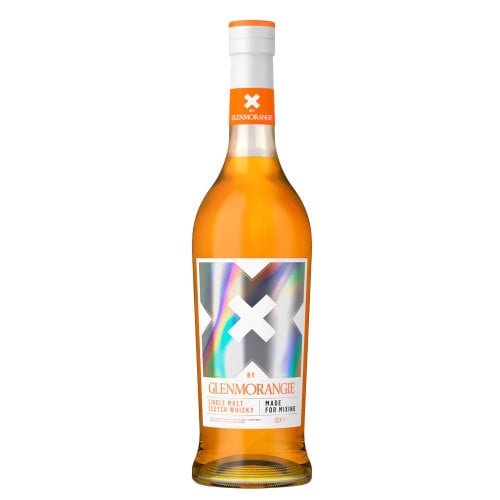