Size750mL Proof80 (40% ABV)
The flagship of the House of Walker, this whisky earned the Double Gold Medal at the San Francisco World Spirits Competition in 2013. 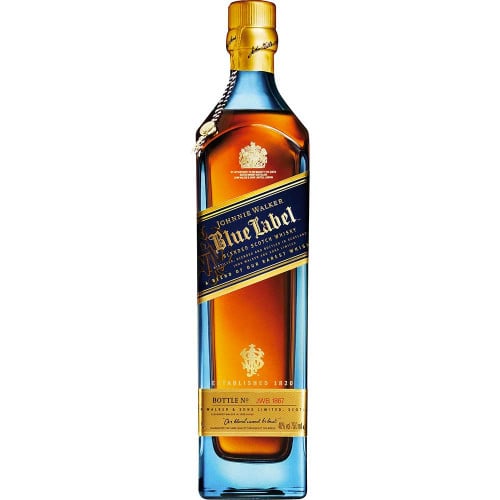 Knowing that only one in every ten thousand casks makes it into the Johnnie Walker Blue Label is a proof that it truly is an unrivaled masterpiece.

Johnnie Walker Blue has a subtly sweet aroma with notes of bittersweet chocolate, caramelized oranges and a touch of tobacco. The initial notes of roasted nuts and smoky chocolate are complemented by hints of rich fruits (including pears), dates, toasted bread and delicate brown spices. The finish, which is incredibly smooth, has a touch of pecan pie, milk chocolate, peppercorn and figs. The whisky earned the Double Gold Medal at the San Francisco World Spirits Competition in 2013, and earned a score of 95 points from Wine Enthusiast Magazine.

Each bottle of Johnnie Walker is encased in a silk-lined box, and comes with a certificate of authenticity and unique serial number.

Pick up a bottle today of THE most famous premium blend in the world!

Aroma of bittersweet chocolate, caramelized oranges and a touch of tobacco. Initial notes of roasted nuts and smoky chocolate are complemented by hints of rich fruits (particularly pears), dates, toasted bread and delicate brown spices. Finish, which is incredibly smooth, has a touch of pecan pie, milk chocolate, peppercorn and figs.

4.7 out of 5
(5 reviews)
Write a review
Real email address is required to social networks
Sign in
Login with Google
Login with Facebook
Or
We also recommend