$29.99
Caskers Rewards members earn up to 1 store points back when buying this bottle.

This product is available in: CO, MO, OK Unfortunately, we can't ship to PO Boxes and APO addresses.

Size750mL Proof100 (50% ABV)
The bottle has received several prestigious awards, including a Gold Medal at the World Whiskies Awards.
Notify me when this product is back in stock.

This product is available in: CO, MO, OK Unfortunately, we can't ship to PO Boxes and APO addresses. 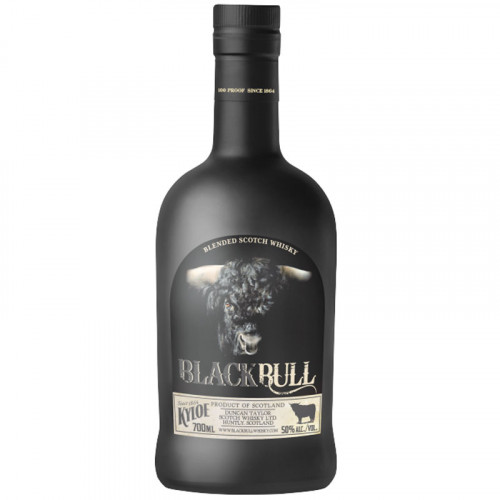 Produced in United Kingdom by Black Bull and bottled at 100 (50% ABV) proof, this well-rounded Scotch is meant to be enjoyed by Spirits enthusiasts and novices alike.

Black Bull Kyloe Blended Scotch Whisky doesn't have any reviews yet. Let's change that. Head out to the Review tab to leave your feedback.

Now owned by Duncan Taylor, the Black Bull brand stays true to its original philosophy of blending Scotch with a high malt content at high proof — in fact, the Black Bull recipe today calls for 50% malt whisky and 50% grain whisky to be bottled at exactly 50% ABV. While those numbers are certainly convenient, the team at Duncan Taylor is always innovating, sampling the choicest single malt and single grain whiskies and selecting only those which are at their absolute peak.
Explore all Black Bull bottles >>

On the nose, Black Bull Kyloe Blended Scotch Whisky really impresses with notes of toffee apple, pear, and clementine. The palate is inviting and offers flavors of hazelnuts, milk chocolate, brown sugar, and raisins, culminating in a medium to a long finish with vanilla notes.