Size750mL Proof80 (40% ABV)
Distilled through Jura's 28-foot tall copper-pot stills, this sherry finished 10YO is ripe with fruit flavors and fairly unpeated, which is a stark contrast to most of its contemporaries across the way.
Notify me when this product is back in stock. 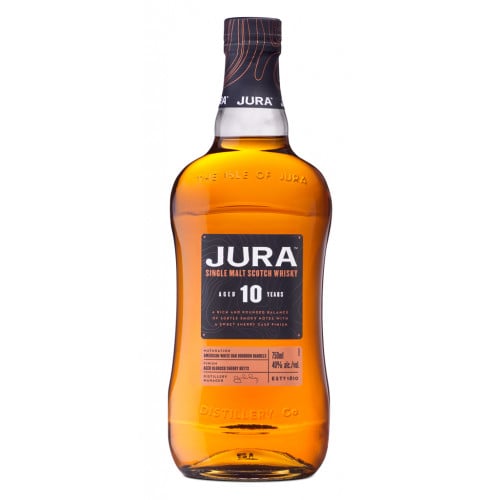 The Isle of Jura Distillery was founded in 1963. It is the only distillery on the Isle of Jura, which dates back to 1810 as being the first licensed distillery on Jura. The distillery sources its water from Loch a’Bhaile-Mhargaidh, and is owned by independent bottlers Whyte & Mackay. Situated sixty miles off the western coast of the Scottish mainland, the Isle of Jura is one of the most sparsely populated islands in Scotland — it boasts 5,000 red deer, 200 human beings, two churches and just one distillery.

The Jura Distillery was founded in 1810 by Laird Archibald Campbell, and sits alongside the Corryvreckan Whirlpool. Nearly a century after it was opened, the distillery was dismantled due to a land dispute, and remained closed until 1963. Today, the Jura Distillery represents a fusion of modern distillation techniques with traditional craftsmanship, and remains one of the most remote and isolated distilleries on the planet.

Jura Single Malt Scotch Whisky is made from Scottish barley, which is milled at the distillery and mashed with hot water in order to release its natural sugars. Once the barley has been mashed, it is fermented and then distilled through Jura's 28-foot tall copper-pot stills.

Jura malt is aged in bourbon casks, with some whiskies being finished in sherry. Their whiskies are really said to come of age around 16 years, this is when the whisky really starts to shine. This is also the age statement of the distillery’s official flagship bottling.

Despite the fact that the water flows through a great deal of peat, the whisky itself doesn’t have much phenol character. This is in stark contrast to most of its contemporaries across the way. Isle of Jura’s 10 Year Old has a light, warm gold coloring. This single malt has a fruity nose with notes of pepper and dark chocolate. The palate is medium-bodied with flavors of nectarines, ginger and coffee. The finish is warming, with sherried notes and the characteristic briny taste of Jura whiskies. This 10YO is an easy drinker, a great introductory whisky.

A light, warm gold coloring. This single malt has a fruity nose with with notes of pepper and dark chocolate. The palate is medium-bodied with flavors of nectarines, ginger and coffee. The finish is warming with sherried notes and the characteristic briny taste of Jura whiskies.