Size750mL Proof92 (46% ABV)
Matured in three types of casks, this whisky earned the Silver Medal at the San Francisco World Spirits Competition in 2014.
Notify me when this product is back in stock. 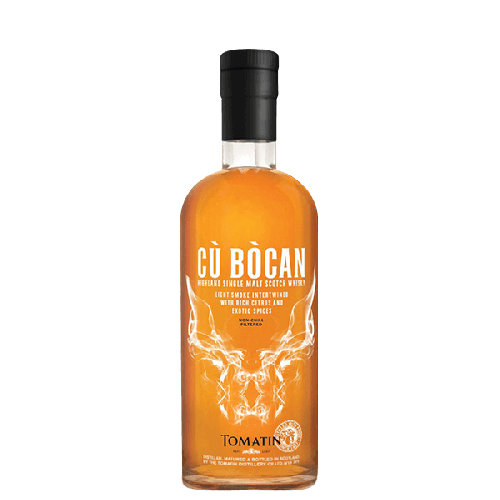 Tomatin Cù Bòcan Highland Single Malt Scotch Whisky pays homage to a spectral hound (named Cù Bòcan) who has haunted the distillery for centuries. The hound was once spotted by a distillery employee, who felt compelled "beyond all natural reason" to touch the hound's fur. As he reached out his hand, the hound dissolved "before his eyes leaving nothing but a vacuum of deathly silence and an inky blue cloud of smoke, soon spirited away across the peat moorland."

For one week each year, Tomatin Distillery produces a spectral peated single malt scotch whisky, in contrast to their typical unpeated expressions. The whisky is crafted from malted barley, which is smoked over a peat flame to approximately 15 phenol parts per million. After the barley has been peated, it is fermented and then twice distilled through Tomatin's copper pot stills. The stills have a round, flat shape that gives the whisky a rounder and sweeter flavor profile, notes Douglas Campbell, Tomatin's master distiller.

After distillation, the whisky is matured in three different types of casks: virgin oak casks, casks that were previously used to mature bourbon and casks that were previously used to mature sherry. As a result, the whisky has an aroma of tropical fruits, vanilla, parsley and green herbs. The aroma gives way to hints of honeyed smoke, lime, toasted almonds and cloves on the palate, and leads to a finish touched with charcoal, oak and sweet smoke.

The whisky earned the Silver Medal at the Stockholm Beer & Whisky Festival in 2013 and at the San Francisco World Spirits Competition in 2014. Don't worry about the bottle disappearing after you touch it, though. That's a legend. Hopefully.