Size750mL Proof80 (40% ABV)
This whisky earned a perfect score of 96-100 points from Wine Enthusiast, which called it "one of the finest blended scotches in the world."
Notify me when this product is back in stock. 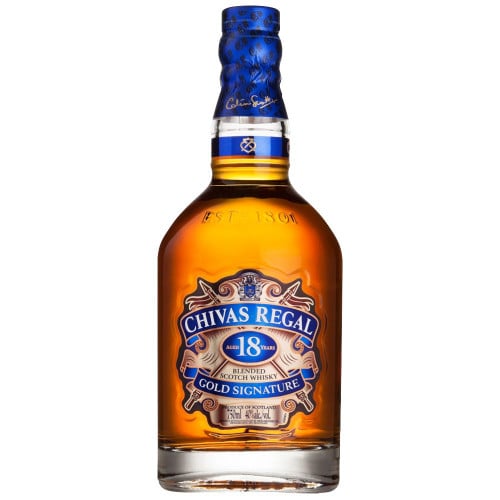 Chivas Regal Gold Signature 18 Year Old Blended Scotch Whisky is made by blending over 20 unique single malts, predominantly from Speyside region, each aged for at least 18 years. The proprietary blending and aging process gives the whisky its rich, amber color, as well as an aroma of dried fruits, melted butter and dark chocolate. The whisky is velvety and luxurious on the palate, where further notes of dark chocolate are accentuated by floral tones and a mild, sweet smokiness. The finish is warm and elegant, punctuated by both honey and oak.

Wine Enthusiast gave this whisky a perfect score of 96-100 points, calling it "one of the finest blended scotches in the world," and Paul Pacult proclaimed, "blended scotch doesn't get any better than this."

Pick up one of the finest blended scotches in the world today!

Aroma of dried fruits, melted butter and dark chocolate. Velvety and luxurious on the palate, where further notes of dark chocolate are accentuated by floral tones and a mild, sweet smokiness. Warm and elegant finish, punctuated by both honey and oak.