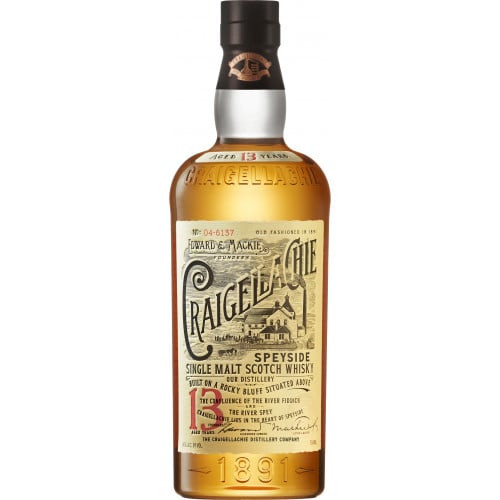 Located in the heart of Speyside, at the confluence of the rivers Fiddich and Spey, Craigellachie Distillery takes its name from the town of Craigellachie, which literally means "rocky hill." Situated on a cliff that overlooks the river Spey, the town of Craigellachie dates back to the early 18th century, and the distillery itself was built by a group of blenders and merchants in 1891. Designed by then-famous architect Charles Doig, Craigellachie Distillery reflects the rustic, adventurous attitude of the mountains on which it was built, and has been described since its earliest days as "old-fashioned."

"Craigellachie has always been the problem child for us in that’s it’s sulphury and meaty," says Stephen Marshall, a global marketing manager for the brand. "It’s difficult for other companies to take. We’ve been sitting on stocks of it without realizing how good it was; it’s really good stuff."

Craigellachie 13 Year Old Single Malt Scotch Whisky is part of the Last Great Malts Collection from Dewar’s, and it has been carefully selected by Master Blender Stephanie Macleod to showcase the very best of Craigellachie’s distinct character, which has been said to demonstrate the best elements of Speyside, both dark and light. The whisky has straw gold color and a bold, peppery aroma that is bolstered by stone fruits, cloves, vanilla and marshlands. The palate is hearty, filled with lively notes of melon, honeysuckle, toffee and burnt wood, and leads to a complex finish, with additional notes of charred oak, apricots and rustic earth.

The Craigellachie range was dubbed one of the "Best New Launches" at the 2015 World Whisky Awards.

Straw gold color and a bold, peppery aroma that is bolstered by stone fruits, cloves, vanilla and marshlands. The palate is hearty, filled with lively notes of melon, honeysuckle, toffee and burnt wood, and leads to a complex finish, with additional notes of charred oak, apricots and rustic earth.