Size750mL Proof80 (40% ABV)
Thomas Parr was an Englishman who is said to have lived more than 152 years. The Grand Old Parr blended Scotch is inspired by the wisdom and maturity that the legend represents. It's a complex, full-flavored, and smooth 18-year-old expression. 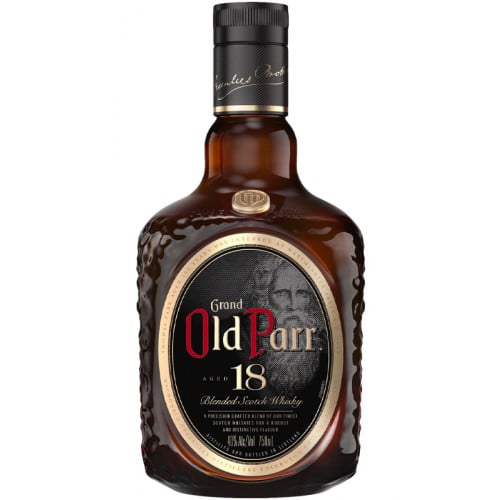 Born in 1483, Thomas Parr was an English farmer who is said to have lived for 152 years and 9 months. The farmer would have lived through the reign of 10 monarchs. Only when visiting King Charles I in London, did the ancient man finally pass away. By then he had become a symbol of maturity and wisdom. He was buried in Westminster Abbey as per the King's orders.

Scottish brothers James and Samuel Greenlees launched their whisky blending and merchant business in London in 1871, just as the demand for blended Scotch was on the rise. Believing that a combination of whiskies at the peak of their maturity would produce an extraordinary spirit, they proceeded to experiment in the search of one such perfect blend. This quest led them to achieve the status of legends as pioneers of the blended whisky business of the time. In 1909 they introduced Ancient Old Parr, named after another legendary figure whose wisdom and maturity are reflected on the whisky.

In 1941, the label was changed to Grand Old Parr. Today, the brand is owned by Diageo and features a 12-year-old and 18-year-old whisky in the Grand Old Parr lineup. The 18 is a blend of aged Scotch whiskies from Cragganmore. Bottled at 80 proof, the whisky is complex, full-flavored, and smooth.

Get your bottle of this historic blended Scotch today!

It's a complex whisky with notes of fruit and oak on the nose. The palate is full-flavored and fruit-forward with a pleasant sweetness, dark fruit, oak, leather, and a hint of smoke. The finish is smooth, long, and oaky.