Size750mL Proof93.2 (46.6% ABV)
In homage to Islay’s Oa peninsula, this is the first new whisky to be added to Ardbeg’s core range in almost a decade.
Notify me when this product is back in stock. 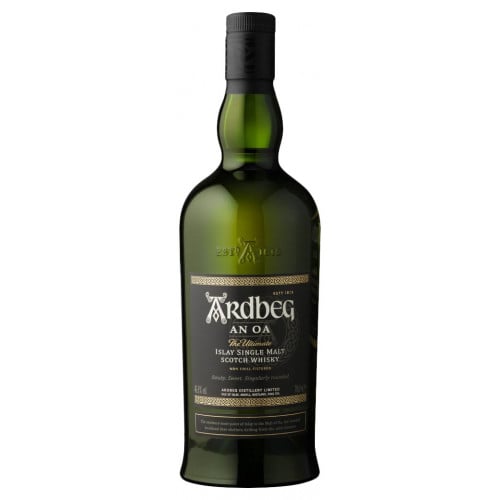 Then, the mashed barley is fermented in washbacks made of Oregon pine. While wooden washbacks are more expensive and difficult to maintain as compared to stainless steel washbacks, they absorb a portion of the heat generated during the fermentation process and thus, create a lighter and richer whisky. In addition, the wooden washbacks contribute estery, carbolic compounds to the whisky.

Ardbeg An Oa is the first new whisky to be added to Ardbeg’s core range in almost a decade. This NAS single malt is comprised of whiskies of different cask types – including Pedro Ximénes, spicy virgin charred oak, and ex-bourbon casks— married together in Ardbeg’s bespoke French oak “Gathering Vat” in the distillery’s Gathering Room, a former grain store.

The expression is in honor of Islay’s Oa peninsula. Home to Ardbeg, the peninsula is also home to the Lagavulin and Laphroaig distilleries. Nonchill-filtered and bottled at 46.6% ABV, this limited edition has hallmark Ardbeg peat notes, flavors of dark chocolate and aniseed, smooth, silky butterscotch, black pepper, and clove.