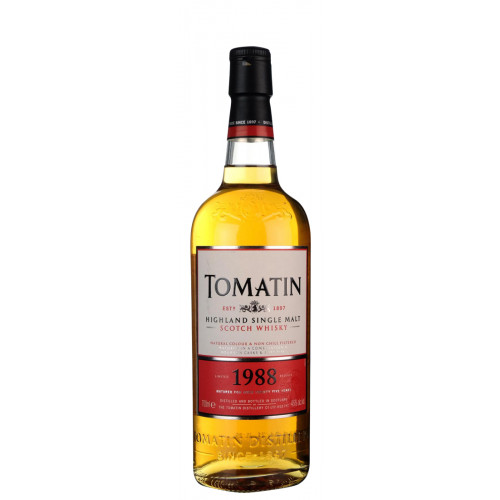 Tomatin Single Malt Scotch Whisky is made from plump, Scottish barley. After the barley is harvested, it is mashed and fermented before being distilled twice through Tomatin's copper-pot stills. The stills have a round, flat shape that gives the whisky a rounder and sweeter flavor profile. The distillery has produced several beautiful whiskies, full of character, including their distinguished 25 year.

This expression is one of three batches in this Tomatin 1988 series. This vintage is from April of 2014, vatted from a combination of traditional oak casks and some of the finest ex-Tawny Port pipes, for a sweet and fresh spirit that smells like “breakfast in a glass.” Like the majority of Tomatin expressions, this whisky comes with a long list of accolades including gold and double gold medals at the 2015, 2016 and 2017 San Francisco World Spirits Competitions. Jim Murray also rated it 95.5/100 in his 2017 Whisky Bible.

Fruit-laden on the nose with a fresh floral character. Sweet notes of honey, vanilla, and sherry, dried apricots, oak, nuttiness, and butterscotch. The palate is complex with sweet fruit, baking spices, and oaky flavors. The finish is medium length with oil tannins, Port, and fading fruit notes.