Size750mL Proof96.6 (48.3 ABV)
The third release in Bowmore's Vintner's Trilogy, this 27 Year Old was aged for 13 years in ex-bourbon barrels and then for 14 years in port pipes. A luxurious balance of sweet, spicy and salty notes with peat smoke, this is a superb and decadent expression.
Notify me when this product is back in stock. 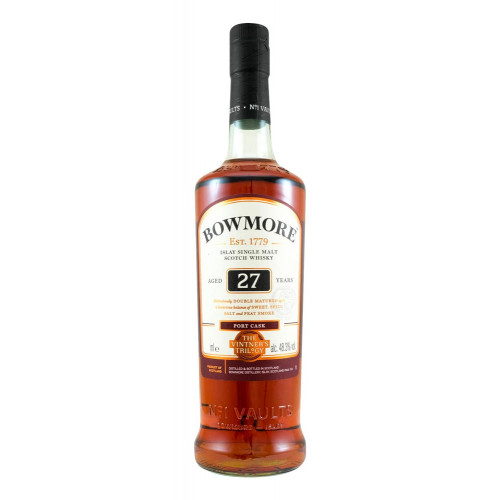 Bowmore 27 Year Old The Vintner's Trilogy is the third release in the Vintner's Trilogy collection. Double matured in the world's oldest Scotch maturation warehouse – the legendary No.1 Vaults – it's first aged for 13 years in ex-bourbon barrels and then for 14 years in port pipes. The result is a luxurious balance of sweet, spicy and salty notes with peat smoke. Non-chill filtered and bottled at 96.6 proof, it captivates the eye with a deep mahogany hue and the senses with a beautifully peaty nose and a decadent palate with smoky notes dancing with sultanas, sugarplums, salted caramel and sweet leather.

Deep mahogany hue. Peaty and medicinal nose greets with notes of toffee, spice, heather and a hint of rosemary as well as aromas of berries. The palate is sweet, salty and smoky with flavors of sultanas, sugarplum, sweet leather and salted caramel. The finish is complex and lingering.