Size750mL Proof107.6 (53.8% ABV)
This well-aged Tobermory has spent a part of its 21 years of maturation in Manzanilla sherry casks. The drier and saltier sherry casks add citrus and spice notes to the 107.6-proof limited-release single malt that is bottled without chill-filtration and coloring. 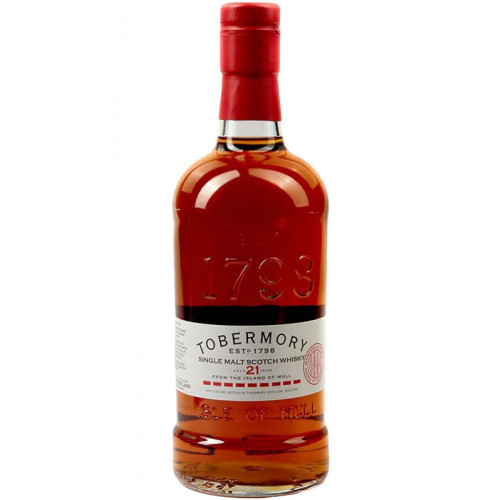 Tobermory uses optic barley sourced from several Scottish malt makers, meticulously selected by their own master distiller. The barley is soaked in fresh water for two to three days and then spread out on the distillery floor to germinate for one to three weeks (depending on the season). The barley is constantly monitored, turned, and tended, and as it germinates, it is infused with the distinct sea mists of Mull. The barley is then milled in a traditional Porteus mill to the Master Distiller's exact specifications. They distill their whisky using the same techniques they used over two hundred years ago, using two wash stills and two low wines stills.

This 21-year-old Tobermory is a well-aged single malt that was finished in Manzanilla sherry casks. Manzanilla is a paler, drier sherry with a salty flavor, meaning that the influence of the cask is different than that of your typical rich sherry. The whisky gets additional citrus and spice notes from the Manzanilla casks. Bottled without any coloring or chill-filtration at 107.6 proof, the expression is limited to around 5,500 bottles.

Grab a bottle of this unique sherried single malt today!