Learn more
Size750mL Proof92 (46% ABV) *Please note that the ABV of this bottle may vary
Aged for 18 years, this whisky was named "Best Campbeltown Malt" at the World Whiskies Awards.
Notify me when this product is back in stock. 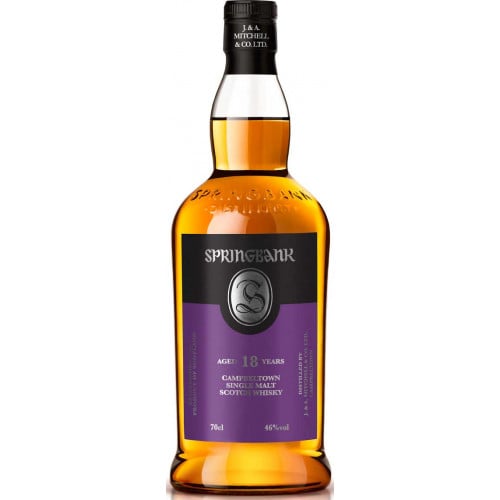 In 1828, Springbank Distillery was founded on the site of Archibald Mitchell's illicit still in Campbeltown. (Today, Mitchell's great-great-great-grandson owns the distillery). Within ten years, its whisky was so well-regarded that a blender by the name of John Walker purchased 118 gallons of whisky from Springbank at 43 pence a gallon.

Springbank 18 Year Old Single Malt Whisky has a golden honey color, along with an aroma of orange, sherry, whipped cream, papaya and citrus. The aroma gives way to notes of eucalyptus, buttered dough, vanilla, toffee and red fruits on the palate, and leads to a finish accented by touches of citrus peels, coconuts and molasses.