Size750mL Proof90.4 (45.2% ABV)
Inspired by the Frost and Fire Giants of Norse mythology and their battle to rule the world. FIRE Edition is the second cult release in the two-part experimental series. Its natural blush hue and full-bodied flavor is uniquely the result of maturation in port seasoned casks for 15 years - a first for Highland Park distillery. Very limited quantities available.
Notify me when this product is back in stock. 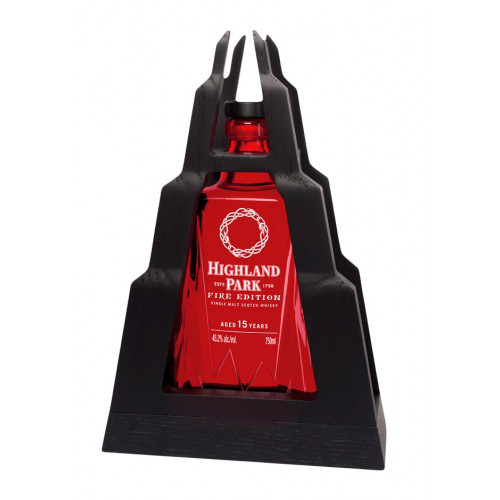 Highland Park is an incredible longstanding whisky house, and they pride themselves on their rich Norse heritage, an essence which is reflected in their craft. They malt their own barley, using locally cut peat from the nearby Hobbister Moor. The malt is peated to 20 parts per million phenol, and then mixed with unpeated malt produced on the Scottish mainland.

The Highland Park Fire and “Ice” limited edition whiskies are part of a two part elemental series is inspired by the Norse stories of the Ice and Fire Giants and their battles against the Gods to rule the world. Fire’s special crimson red colored glass was specially designed to symbolize the molten world of the Fire Giants from Viking mythology.

The second in a two-part limited edition series, Highland Park FIRE Edition was created as a bold reflection of the Norse mythology and Viking roots that characterize our distillery’s home in Orkney, an island north of the Scottish mainland. Matured exclusively in 100% refill Port wine seasoned casks (a first for Highland Park) FIRE Edition is a vibrant 15 Year Old single malt with an ABV of 45.2%. A companion for ICE Edition— which was awarded 99/100 at 2016’s Ultimate Spirits Challenge — reddish-hued FIRE Edition delivers intense ripe plum and chocolate aromas alongside a light smoke, with a long, lingering finish. A spirit all its own, but undeniably Highland Park, it makes a beautiful addition to any whisky lover’s collection. This whisky received "Gold Medal" at the 2018 San Francisco World Spirits Competition, "5 Stars & Highest Recommendation" by the F. Paul Pacult's Spirit Journal, and "91 Points" from Wine Enthusiast.

Pick up your bottle of whisky art today!