Learn more
Size750mL Proof92 (46% ABV) *Please note that the ABV of this bottle may vary
A blend of Islay, Speyside and Island single malts, this whisky earned the title "Scotch Whisky Blend of the Year" from Whisky Advocate. 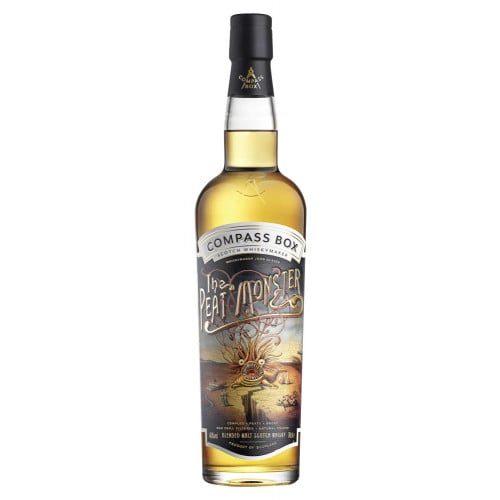 About Compass Box The Peat Monster

"For those who love big, rich smoky-peaty whiskies, this is for you," says Jon Glaser, the founder of Compass Box Whisky Co. Since its inception in 2000, Compass Box Whisky has been committed to making blended scotch whisky more relevant and approachable. "Like a winemaker blending grape varieties, we can create layers of complexity," says Glaser, who is one of the most progressive and innovative blenders of his generation.

Nestled in a hidden cove near Port Askaig, Caol Ila Distillery (pronounced "Cull Eela,") was founded in 1846 by Hector Henderson. It borrows its name, which means "The Sound of Islay" in ancient Gaelic, from the sea sweeping past its dramatic and almost hidden location — it is situated between a steep cliff and the eastern shores of the Sound of Islay. For over a century, small coal-fired boats known as puffers navigated the Sound and brought barley, coal and casks to the distillery. Although the puffers no longer exist, Caol Ila continues to use locally malted barley and pure spring water sourced from Loch Nam Ban (the water travels through limestone and peat before reaching the distillery) in order to produce its single malt whisky.

Unlike other distilleries on Islay, Caol Ila intentionally distills its whisky through copper-pot stills that are less full in order to maximize contact between the whisky and copper. As a result, the whisky has a cleaner and crisper flavor profile, while still retaining the notes of peat and smoke that are characteristic of Islay single malts.

Situated on the southern coast of Islay, Laphroaig (pronounced La-froyg) Distillery was founded nearly two centuries ago by Donald and Alexander Johnston. For approximately 150 years, the distillery remained in the hands of the Johnson family. In 1954, however, Sandy Johnson died childless and left the distillery to one of its managers.

Laphroaig Single Malt Whisky — one of the most strongly flavored whiskies made anywhere in the world — is heavily influenced by the geography and climate in which it is distilled and matured. For instance, the peat used to dry barley at Laphroaig Distillery has high concentrations of moss, which gives the whisky an intensely smoky flavor profile. In addition, the whisky matures on the shores of Loch Laphroaig, and as a result, has a subtle undertone of tang and salt that complement its notes of smoke and peat.

Sitting in the verdant Aberdeenshire countryside not far from the Grampian mountains, Ardmore Distillery was founded in 1898 by Adam Teacher. Today, the distillery remains one of the few distilleries outside of Islay that continues to peat each expression of its single malt whisky. After sourcing the finest Scottish barley, Ardmore dries it over natural, highland peat fires (the peat is sourced from New Pitsligo and St. Fergus Moss, the same peat mosses that the distillery has been using for over a century). Once the barley has been malted and peated, it is fermented in wooden fermentation tanks made of Oregon Pine before being twice-distilling through Ardmore's copper pot stills.

"What makes The Peat Monster fit perfectly into the Compass Box house style," says Glaser, "is the balance of richness and subtle sweetness that the casks of Speyside malt provide to the smoky, peaty Islay and Island malts."

After sourcing each of the single malts, Compass Box Whisky Co. marries the whiskies together for a few months in refill American oak casks before bottling each batch. Compass Box's The Peat Monster has a intensely peaty nose, reminiscent of beach bonfires. The initial notes of smoke are balanced by a hint of fruitiness and lead to a subtle yet lingering finish.

Intensely peaty nose, reminiscent of beach bonfires. Notes of smoke are balanced by a hint of fruitiness and lead to a subtle yet lingering finish.