Size750mL Proof43% ABV
The Lost distillery’s Lossit blended malt is soft smoke on the nose followed by almond milk accompanied with flavors of porridge, pear drops and lemons. The palate is peaty and peppery with toasted oak notes.
Notify me when this product is back in stock. 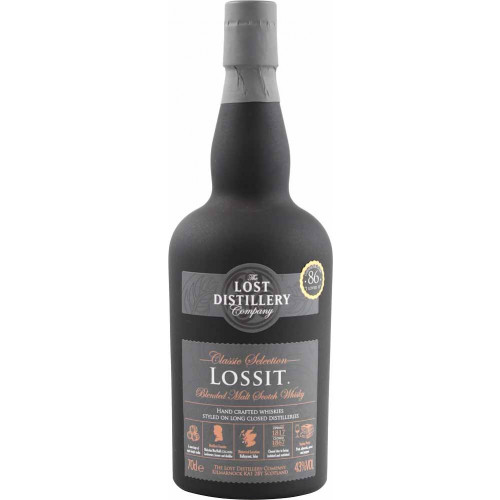 The Lost Distillery Company is a boutique Scotch Whisky company, that specializes in crafting new artisanal expressions with blends from long lost distilleries in Scotland. The distillery aims to create contemporary blends without compromising authenticity. Founders Scott Watson and Brian Woods, both have expansive resumes, working with industry giants such as Diageo. They launched their Lost Distillery project in 2013.

When reincarnating the whiskies they review several key components to ensure that they retain their original character. From the era in which the distillery existed, to the nature of the ingredients used in the whisky (where the barley, yeast, peat and water were sourced), and the wood used to store and finish the spirit. An exhaustive list of factors are reviewed before proceeding with the artisanal expression. The company also has an archiving team led by a professor from The University of Glasgow, Michael Moss.

The Lost Distillery pays homage to the Lossit Distillery. Malcolm McNeill, a prominent farmer-distiller, founded the distillery in 1817, The Islay distillery at Lossit Kennels, near Port Askaig. In its earliest years, Lossit was the biggest producer of whisky on Islay until they closed in 1867. Lossit used either ex-sherry, or pure oak casks. These sherry casks, infused sweet, zesty fruit flavors into the aging spirit. Fragrant peaty notes fused with floral notes from the bere barley. They sourced water from Loch Lossit. The rise of big blending enterprise started the demise of the pure malt distillery.

The Lost distillery’s Lossit blended malt is soft smoke on the nose followed by almond milk accompanied with flavors of porridge, pear drops and lemons. The palate is peaty and peppery with toasted oak notes.

Soft smoke on the nose followed by almond milk accompanied with flavors of porridge, pear drops and lemons. The palate is peaty and peppery with toasted oak notes.