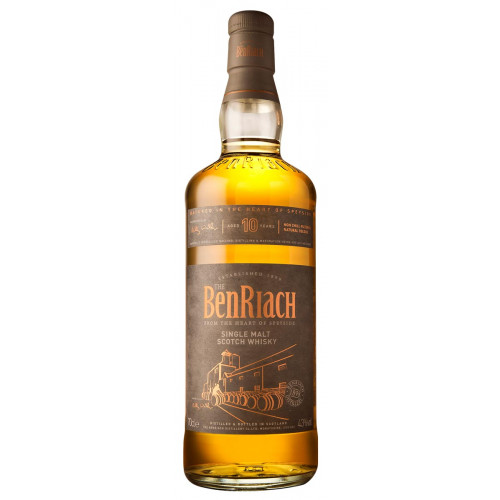 Amidst the lush greenery, in the heart of Speyside, sits the pagoda’d roof of the BenRiach distillery. A facility that has been producing single malt Scotch since 1898. The area of Moray is known for its funnel shape, with the tip pointed to the source of the Spey River. Benriach sits at the very center of this funnel, just outside the town of Elgin. The story of BenRiach is one of resilience. In 1897, John Duff built the BenRiach distillery, after his early success with his Glenlossie and Longmorn distilleries. Duff even built a railroad in 1990, for the purpose of moving supplies back and forth between the two shops.

But the 1960s were good to BenRiach as well as the entire industry, and the facility remained operational from 1965 onwards. In 2004 the distillery was bought out by a private entity who released a true BenRiach single malt Whisky. The distillery eventually fell under the ownership of The BenRiach Distilling Co. which also took (befittingly) the Glendronach and Glenglassaugh distilleries under its umbrella.

BenRiach 10YO has all the characteristics of the classic Speyside Whisky. Aged in a combination of ex-bourbon and ex-sherry casks before being bottled at 43% ABV, this single malt is vibrant and fruit-laden, featuring notes of warm oak spices, and green apple, as well as the signature peach and apricot flavors characteristic of BenRiach. The Whisky also features flavorful notes of banana, with a hint of aniseed, lemon zest, and barley. This 10YO won Silver medals three years running at the International Wine and Spirits Competition (2015-2107).

On the nose, a fresh and lively combination of crisp, green orchard fruits, stem ginger and hints of tangerine mellows to creamy vanilla with a delicate note of mint and a gentle twist of citrus, all held together with a sweet barley back note. The palate features warm toasted oak spices, green apples and dried apricots, ripening to hints of peach and soft banana. Subtle touches of aniseed and lemon zest create a contrasting edge to the fruit and add an intriguing character to the long, crisp barley finish.