Size750mL Proof80 (40% ABV)
Glenfarclas 10 Year Old is a Speyside Highland single malt whisky, aged in European oak casks used once for Oloroso sherry, and bottled at 40% ABV. This expression from the 2020 Icons of Whisky Scottish Distillery the Year, which remains whisky aficionados' best-kept secret, makes for an excellent aperitif.
Notify me when this product is back in stock. 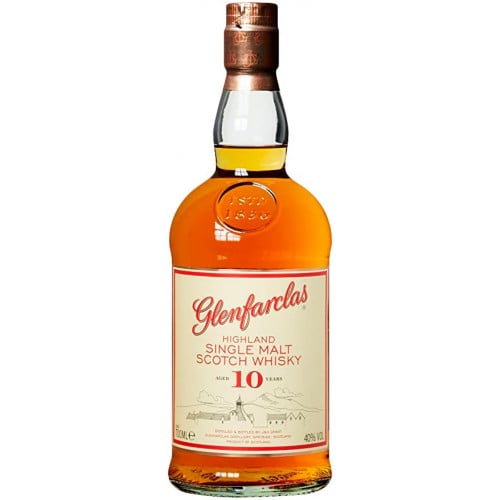 The Glenfarclas distillery is a family business in its truest sense, having been in the hands of the Grant family for 6 generations. The distillery, which started its operations before 1791 and was first granted a license in 1836, was bought by John Grant in 1865. Grant, a well-known cattle breeder, first leased the distillery to his distant cousin John Smith. When Smith left in 1870 to start the Cragganmore distillery, John’s son George took over. In 1890 George died only a year after his father, and left the distillery to his widow and two sons, John and George. George’s sons, George S. Grant and John P. Grant incorporated Glenfarclas as a private limited company in 1947, and a few years later George was appointed the chairman of the company, staying at the helm for 52 years. The early years of George’s tenure were marked by rapid growth and expansion, with the production doubling due to high demand from blenders. In the late 1960s, demand for whisky started to decline, and Glenfarclas lost its biggest client. George made the wise decision to put aside more stock for the distillery’s own bottling instead of relying heavily on the demand from blenders. This resulted in the distillery now having an abundance of aged stock, and their warehouses currently hold casks of the past seven decades.

Now the distillery is run by the 5th and 6th generation of the family, still faithful to the vision of creating the finest Highland single malt whisky in the Speyside way. With over 150 years of experience in the family, the distillery produces a traditional Highland malt with a heavy sherry influence using artisan methods handed down through generations. Glenfarclas is one of the few distilleries using direct fired stills, and their six stills are the biggest in Speyside. The spirit is distilled twice before being put in casks, which are kept in traditional dunnage warehouses.

Glenfarclas’s 10-year expression is aged in the finest European oak casks used once for Oloroso sherry, which are personally picked by John Grant at a family-owned bodega in Spain. The youngest of the eight whiskies in the distillery’s aged range has a depth and finish you would expect from a much older drum.

The nose with sherry-sweet malty tones and subtle spices is followed by a delicately light palate with a combination of maltiness, sherry sweetness and hints of dried fruit, vanilla, cinnamon and cloves. The finish is long, smooth and spicy.