Learn more
Size750mL Proof86 (43% ABV) *Please note that the ABV of this bottle may vary
This Highland whisky expression is aged in ex-bourbon barrels and serves as a great entry point into the world of Tullibardine. Bottled at 86 proof, its profile has a balance of floral, fruity, barley, and vanilla notes.
Notify me when this product is back in stock.

This product is available in: MN, TX Unfortunately, we can't ship to PO Boxes and APO addresses. 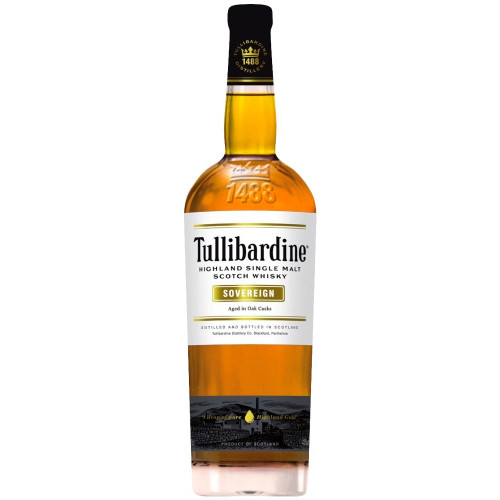 Following his coronation at the Scone Palace in 1488, King James IV purchased a keg of beer at the Tullibardine Brewery, the first public brewery in Scotland. At the time, the brewery used crystal clear spring water that flowed from the Ochil Hills down to the brewery in order to craft its unique ales. Nearly five centuries later, a Welshman named William Delme Evans purchased the brewery and converted it into a distillery (Evans was also responsible for designing the Jura and Glenallachie distilleries). In 1949, the first drops of Scotch whisky flowed from the distillery's stills, and today — over six decades later — the distillery continues to use much of the same ingredients and methods that the Tullibardine Brewery used in crafting King James' beer, including the same crystal clear spring water.

Tullibardine Single Malt Scotch Whisky is made exclusively from locally-sourced malted barley. Once the grains arrive at the distillery, they are milled and mashed before being fermented in the distillery's washbacks. Following fermentation, the wash is distilled through the distillery's copper-pot stills that were installed in 1974.

The Sovereign is their entry-level expression that is aged in ex-bourbon barrels for around 5 years. Bottled at 86 proof, this Highland whisky has floral, barley, and vanilla notes with a touch of sweetness, fudge, fruit, and spice. A wonderful entry point into the world of Tullibardine, it's also a delicious cocktail base.

The golden whisky leads with a floral nose with notes of sweet barley and vanilla. There are fruity notes of apple and pear on the palate along with honey, and vanilla. Finishes with fruit, fudge, and gentle spice.