Learn more
Size750mL Proof86 (43% ABV) *Please note that the ABV of this bottle may vary
The Macallan Rare Casks series was first introduced in 2018. Rare Cask Batch No. 1 is a single malt drawn from a select group of fifty sherry-seasoned casks delivering a rich, full-flavored expression of the Macallan we all love.
Notify me when this product is back in stock. 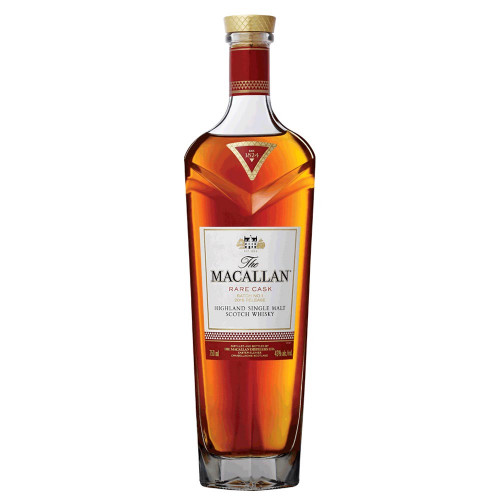 The Macallan issued three releases of their Rare Cask edition for 2018 (there will be four releases in 2019). Each small batch release is comprised of fifty hand-selected sherry butts containing The Macallan’s classic Speyside single malt of various ages. Uniquely, the casks used are a split between American and European oak, which increases the presence of vanilla and enhances reddish hues. It’s delivered at 43% ABV in The Macallan’s lovely sculpted decanter — itself worthy of your top shelf.

Warm vanilla, figs, and orange zest make for a powerful aroma. Once sipped, notes of chocolate, sultanas, spice, and more citrus bloom with waves of wood oak and a long, warm finish.