As a result of a meticulous distilling process and insistence on only the finest ingredients as well as almost two decades spent in hand-picked sherry seasoned oak casks from Jerez, The Macallan 18 Year Old Sherry Oak Single Malt Scotch Whisky delights with an unparalleled depth and complexity. Delivering aromas of toasted oak and ginger, along with notes of raisin, vanilla, and cinnamon on the nose, the palate is bursting with decadent flavors of orange, vanilla, and ginger, mingling with clove and toasted oak, all leading to an elegant finish filled with orange zest, ginger and dried fruit.

The Macallan 18 Year Old Sherry Oak Single Malt Scotch Whisky is aged for nearly two decades in a combination of sherry-seasoned Spanish oak and sherry-seasoned American oak casks. The Macallan takes great care to source, craft, season and care for these casks, as they account for approximately 60% of the final aromas and flavors of the whisky, according to a study commissioned by the distillery.

Aroma of toasted oak and ginger, along with notes of raisin, vanilla, and cinnamon. Palate is bursting with orange, spice and clove, as well as toasted oak, and leads to an elegant finish filled with orange zest, ginger and dried fruit. 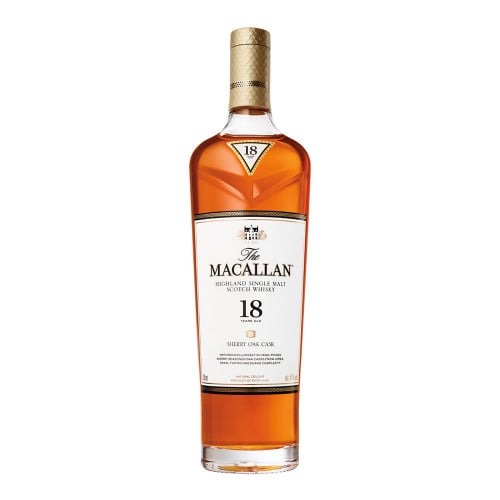