Size750mL Proof80 (40% ABV)
Certified kosher, this single malt earned the Double Gold Medal at the San Francisco World Spirits Competition in 2010.
Notify me when this product is back in stock. 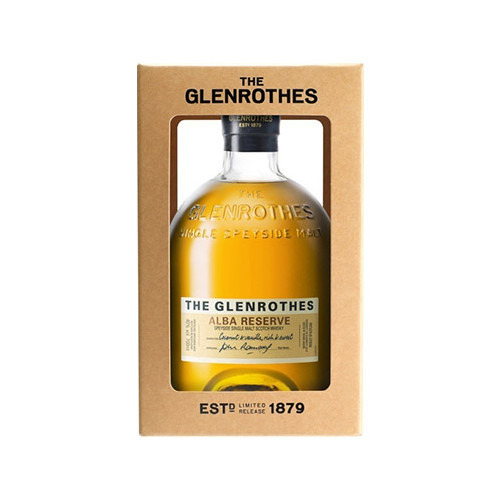 Situated adjacent to the Burn of Rothes in the Speyside region of Scotland, The Glenrothes Distillery was founded by in 1879 by James Stuart, who had previously been employed at The Macallan Distillery. The distillery's history is marred by tragedy — in 1897, construction workers who were attempting to expand its capacity started a fire that consumed much of the distillery's equipment and infrastructure. Twenty-five years later, a fire in the distillery's original warehouse caused the loss of 200,000 gallons of maturing whisky. Despite having lost ten copper-pot stills in various accidents since its founding, the Glenrothes Distillery is now a picture tranquility.

Glenrothes Single Malt Scotch Whisky is made from plump, ripe Scottish barley, which is malted and fermented using water sourced from the Ardcanny and Brauchhill springs (the springs are situated adjacent to the distillery). Following fermentation, the grains are twice distilled through the Glenrothes' copper-pot stills. The stills, which were designed and fashioned to be exact replicas of the original stills installed in 1879, are incredibly tall and uniquely shaped, which contributes to the overall light and sweet flavor of the whisky. After distillation, The Glenrothes' stillmen remove the heads and tails of the distillate and preserve only the "hearts" for maturation (the hearts comprise less than 20% of the entire distillate).

The Glenrothes Alba Reserve Speyside Single Malt Scotch Whisky is the first kosher whisky ever produced by The Glenrothes Distillery (it was certified by Rabbi Padwa of the London Beth Din) and one of the few whiskies produced by the distillery that is matured exclusively in American oak casks that were previously used to mature bourbon (its name is derived from the scientific name of American oak, Quercus Alba).

The whisky is also one of the softest and gentlest ever produced — it has a sweet aroma of vanilla, graham crackers and tropical fruits. Notes of rich bananas, coconuts, vanilla beans and caramel dominate the palate, and are complemented by a hint of oak. The finish is soft and easygoing, with a whisper of smoke.

The whisky earned the Double Gold Medal at the San Francisco World Spirits Competition in 2010. Pick up a bottle today!

Sweet aroma of vanilla, graham crackers and tropical fruits. Notes of rich bananas, coconuts, vanilla beans and caramel dominate the palate, and are complemented by a hint of oak. Finish is soft and easygoing, with a whisper of smoke.