Size750mL Proof94.8 (47.4 % ABV)
Apart from the name, nothing is small about Ardbeg's newest addition to their permanent lineup. It's a 5-year-old peat monster and an incredible entry point into the world of Islay Malts. 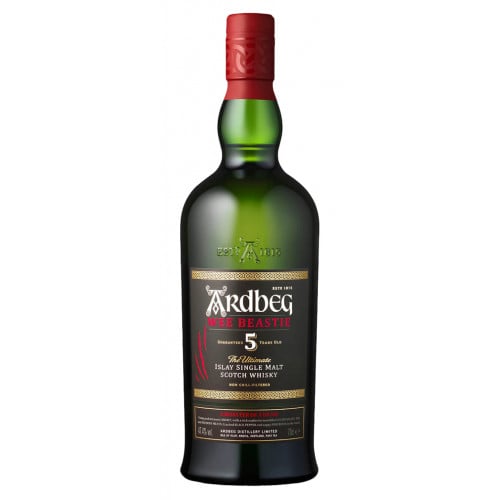 Ardbeg Wee Beastie is the newest permanent addition to their core lineup of whisky and a sign of things to come for the expanding distillery. It proudly shows its age statement, having spent 5 years in ex-bourbon and Oloroso sherry casks, before being bottled at 94.8 proof. That's a hefty alcohol volume that belies the expression's position as an entry point into the world of Ardbeg. Contrary to its name the Wee Beastie is a big, bold, and all-around proper Ardbeg. It's the smokiest in all of the permanent range and has been crafted to work especially well in cocktails as well.

The nose is bright with herbal, vanilla, pear, black pepper, and honeyed ham notes. There's some coffee and pine resin in there as well. The palate brings chocolate, smoked bacon, eucalyptus, and aniseed to the table. Finishes long and briny with lingering cocoa and cured meat notes.