Size750mL Proof93.4 (46.7% ABV)
Renovated and revived in 2017, Bladnoch produces Lowland single malt Scotch. This expression was matured in a combination of first-fill bourbon and sherry casks. 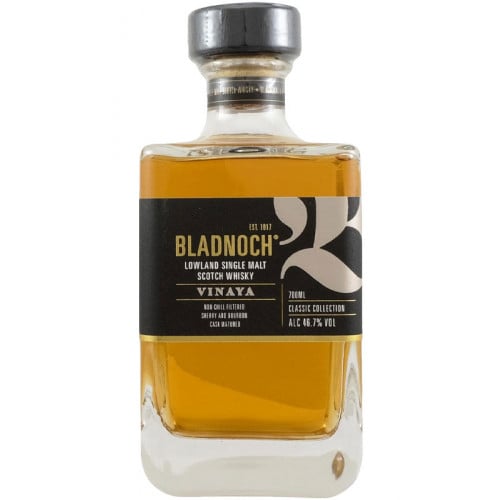 Situated on the banks of the River Bladnoch, in Scotland's Lowlands, Bladnoch stands out as Scotland's southernmost distillery. A quaint distillery, Bladnoch uses just one pair of stills, creating whiskies known for their signature light/delicate character, highly sought after by connoisseurs. They source the water from the Bladnoch River. The whiskey production is overseen by Master Distiller Dr. Nick Savage, formerly of The Macallan.

Bladnoch Vinaya (Sanskrit for respect and gratitude) pays tribute to the founding fathers of the distillery that paved the way more than 2 centuries ago. The Lowland single malt was matured in a combination of first-fill bourbon and sherry casks and features a classic Lowland profile with apple, floral, and grassy notes, as well as some dried fruit. It's non-chill filtered, has no added coloring, and is bottled at 93.4 proof.

Get your bottle of this Lowland single malt today!

The nose is sweet and floral with dried fruit and subtle grassy undertones. On the palate, you'll find fresh green apple, baking spice, chocolate, and a hint of pepper. The finish is light and fresh with a touch of oak.