Learn more
Size750mL Proof80 (40% ABV) *Please note that the ABV of this bottle may vary
From Dewars & Sons’ “Last Great Malts” Collection. Crafted using distinctive wash stills, with a 90 degree bends in their lyne arms that yields a fruitier lighter spirit. “When billows break and haar ghosts in, then haste ye home or some bit warm, unwind with toasted grain and apples, seaborne spice; calm from the storm.” 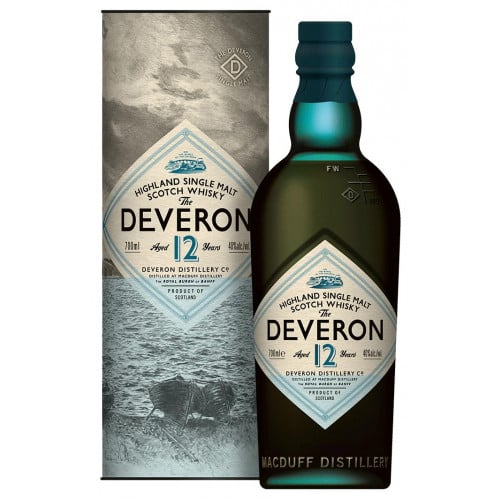 Macduff Distillery was founded in 1962. Located in the Highlands, beside the River Deveron near the North Sea, the official name of the distillery has gone back and forth between names Deveron and MacDuff, but the majority of their bottlings have been released under the name Deveron. The distillery changed hands several times before being acquired by Bacardi’s subsidiary John Dewar & Sons, the label that also owns Royal Brackla, Aberfeldy, Aultmore, and Craigellachie.

The Macduff facility produces 2,400,000 liters of spirit a year. It has a classic design, conjured by distillery architect William Delme-Evans. The stillhouse houses one of the most interesting parts of the overall engineering. It has five stills, two wash, and three spirit. The wash stills have distinct upward-tilted lyne arms and 90-degree kinks in their design.

This unusual bend in the lyne arm creates a reflux that yields a light, fruity spirit. The resultant new make also has a nutty slightly sulphury character, which is due to the quick mashing, short fermentation, and cold condensing technique. It is this process that defines the character of Deveron Whisky.

The Deveron 12 Year was launched alongside a 18 Year Old Single Malt, as part of the Great Malts collection. Bottled in a 700 ml frosted glass, this Highland single malt has notes of spice, fruit, and cinnamon. “When billows break and haar ghosts in, then haste ye home or some bit warm, unwind with toasted grain and apples, seaborne spice; calm from the storm” (Producer).

Fruit aromas, with hints of citrus, apple and raisin on the nose. The palate is silky with flavors of light, sweet, fruit, malt scotch, apples, raisins, spice, and even chocolate. The finish is waxy, with cane sugar, clove, cinnamon, hints of melon, and pepper.