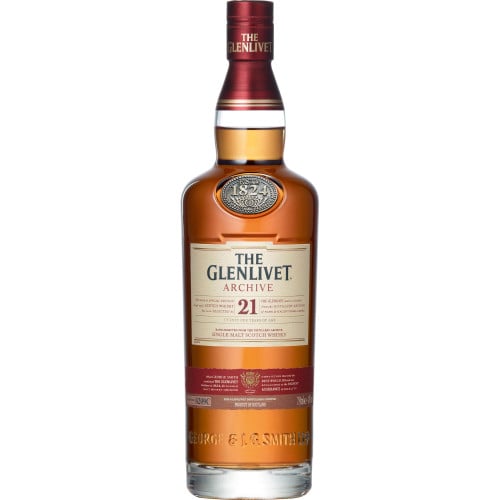 Following distillation, The Glenlivet Archive 21 Year Old Single Malt Scotch Whisky is matured in a combination of ex-sherry casks and ex-bourbon casks for a minimum of 21 years (a portion of the whisky is matured for up to 40 years). The whisky has a rich, luxurious aroma of pine, raisins and sandalwood. The aroma gives way to notes of brown sugar, walnuts and honey on the palate, that are well-complemented by notes of dried fruits, Christmas cake and baking spices. The finish is long and sweet, with a hint of chewy leather, ginger and oak.

Rich, luxurious aroma of pine, raisins and sandalwood. Notes of brown sugar, walnuts and honey on the palate, that are well-complemented by notes of dried fruits, Christmas cake and baking spices. Finish is long and sweet, with a hint of chewy leather, ginger and oak.

3.4 out of 5
(2 reviews)
Write a review
Real email address is required to social networks
Sign in
Login with Google
Login with Facebook
Or
We also recommend