Size750mL Proof80 (40% ABV)
Known as the “gentle dram” this 16-year-old Tomintoul single malt is made with local ingredients and crafted with water with sourced from the Ballantruan spring.
Notify me when this product is back in stock. 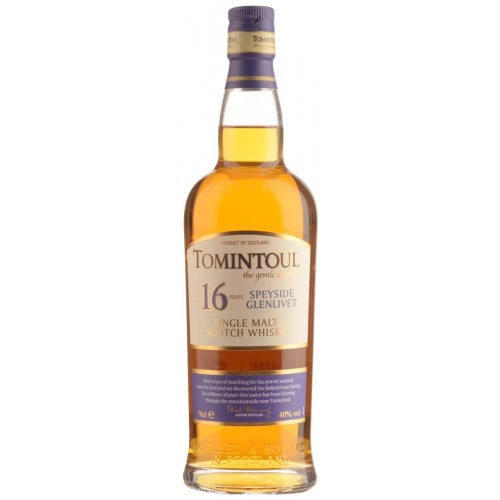 Nestled near the village Tomintoul, the highest village in the Highlands of Scotland inside the picturesque Glenlivet estate, at the heart of the Speyside region, sits Tomintoul Distillery. Tomintoul Distillery was built in 1964. The distillery uses traditional techniques that stretch back hundreds of years.

The production is overseen by Master Distiller, Robert Fleming, whose family has been making whisky in the Speyside Glenlivet region for four generations. Robert got his start in the whisky industry in 1974, where he gained experience from several different distilleries, before coming to Tomintoul, where he has been for over 20 years.

Known as the “gentle dram,” the distillery is surrounded by fresh air and pure water, these elements are imparted onto their whiskies, giving them a special Highland character. Tomintoul is made with natural ingredients and crafted with water sourced from the Ballantruan spring.

Tomintoul uses unpeated barley to make their whiskies, with the exception of their Tomintoul Peaty Tang, a small batch peated malt made only twice a year. The purest middle part of the "run" and stored in a "spirit safe" which is under the control of “Her Majesty's Customs & Excise and so has to stay locked.” The heads and tails of the spirit is re-distilled, while the pure middle bit goes back into casks to mature.

Tomintoul is quite a sustainable outfit, very little gets wasted during production. Tomintoul uses oak wood for maturation, with about 2% of their whisky getting sent to the angels. They recycle the cold water used to cool the hot vapor that rises from the spirit to heat the wort. It is also mixed with the left over barley husks and made into a syrup that is used to feed cattle. The remains that are left over after secondary distillation is also used as fertilizer for the next year’s barley crop.

Tomintoul has a solid core range of whiskies, aged from a 10-year-old to their vintage 1976 Single cask. The majority of Tomintoul expressions are made by meticulous marrying together of selected casks, with the exception of their Tomintoul Vintage cask, which is a single cask release. Tomintoul’s 16-yo is aged 16 years in ex-bourbon casks. It is soft and nutty, with a pleasant richness.

Soft fruits with hints of hazelnut and vanilla on the nose. The palate is full flavored with nutty spicy overtones. The conclusion is creamy and velvety with a spicy finish.