Size750mL Proof115.46 (57.73% ABV)
The Pullman Collection marks the first time in history The Glenlivet has made single casks available in the U.S. Matured for 14 years in a European Oak Butt, only 588 of The Glenlivet Pullman 20th Century Single Cask limited edition bottles are available.
Notify me when this product is back in stock. 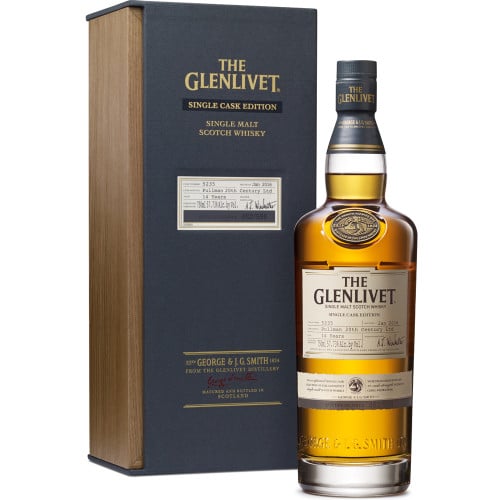 The Glenlivet Pullman 20th Century Single Cask, Single Malt Scotch Whisky was aged in a single European Oak cask filled in 1997. As a result, the single cask imparts much of its flavor unto the whisky. Notes of sweet honey and vanilla on the nose are followed by a hint of spring florals. The palate has robust citrus fruit and spicy notes of cinnamon and cloves balanced by sweet, fruity accents. The finish is long and dry with a subtle hint of spice.

Only 588 of these limited edition bottles are available throughout the U.S. Pick up yours today!

Notes of sweet honey and vanilla on the nose followed by a hint of spring florals. The palate is robust with citrus fruit and spicy notes of cinnamon and cloves balanced by sweet, fruity accents. The finish is long and dry with a subtle hint of spice.